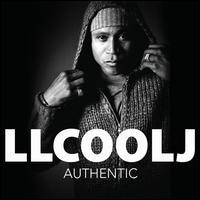 When LL Cool J dubs his 2013 effort Authentic, the veteran rapper is referring to an album that's authentically LL Cool J circa 2013, and not one that's authentically hip-hop. That's important to remember as the everything-but-the-kitchen-sink effort overflows with guests from every genre, like Public Enemy's Chuck D, blink-182's Travis Barker, Rage Against the Machine guitarist Tom Morello, and electro-rocker Z-Trip. That busy jumble of names is not only on the same album, but on the same track, as in "Whaddup," a pop-protest number that's admirable enough, and one that sounds more natural than "Accidental Racist," LL's much-maligned duet with Brad Paisley. Authentic gets its own Paisley team-up with "Live for You," a glossed-up, jukebox country redo of LL's "I Need Love," although when it comes to updates to Cool J's classics, the "Mama Said Knock You Out" return "We're the Greatest" is a better choice, with Eddie Van Halen wailing away as the rapper does a Mike Tyson impression, intentional or not. This variety hour on wax comes alive when characters like Bootsy Collins (making the party number "Bartender Please" sound Deee-Lite-ful), Snoop Dogg (on the club worthy "We Come to Party"), and Charlie Wilson (swaggerfest "New Love" wins just for the line "honk your horn if she's walking by right now") show up, but even so, the album doubles down on some of its best ideas, and Eddie, Snoop, Travis, and Uncle Charlie all return for lesser numbers. LL sounds rusty and a bit under-rehearsed as he belts out his iffy punch lines and motivational anthems, but he pours his heart into the pop numbers and sounds at home during the nostalgic throwbacks. Don't call it a comeback of any sort, but good intentions abound and in a primetime television star manner, the album's title remains true. ~ David Jeffries, Rovi