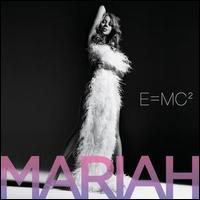 Two weeks prior to the April 2008 release of E=MC2 -- Mariah Carey's tenth album and the sequel to her big 2005 comeback, The Emancipation of Mimi -- the diva broke Elvis Presley's record of being the solo artist with the most number one singles on the Billboard charts. Lots of publicity surrounded "Touch My Body" reaching number one, as well it should: busting an Elvis record is always news, but this particular record served team Mariah well, as it paints Carey as being a diva who's bigger and better than the rest. An unintentional side effect of this very record is that it also tacitly pointed out that Mariah has been around a long, long time: 18 years, to be exact, roughly two years shy of the two decades that it took Elvis to establish his record. Unlike Elvis -- or any other major artist who's been around for two decades, for that matter -- Carey seems determined not to look back, to exist in some kind of eternal now, never acknowledging that she has a past, unless she's wielding her divorce from her ex-husband/ex-record label chief Tommy Mottola for some kind of sympathy, something she does once again here via vague allusions to naïveté and "violent times" on "Side Effects." Mariah refers to that separation so often that it's hard not to think of it as something recent but it happened a long, long time ago -- well over a decade prior to the release of E=MC2, to be precise -- but as the separation was the pivot point for Carey's career, it's easy to see why she keeps returning to it, even if the emotional heft of her singing about the pain has long since diminished.

After that separation, Carey restyled herself as a relentlessly modern R&B diva, chasing every passing trend in a given year, a move that often kept her on the top of the charts -- apart from the post-millennial stumble of Glitter, of course -- but had the side effect of making Mariah a musician who became progressively less mature with each passing year, culminating in the hazy soft-porn fantasies of "Touch My Body," the single that broke Elvis' longstanding record and will likely only be remembered for that achievement. Like so much of Emancipation and E=MC2, which is a virtual replica of its predecessor in almost every way, "Touch My Body" is all about sound, rhythm, and texture and not so much about song, something that helps sustain Mariah Carey's run at the top the charts, but something that also pushes melodic hooks, and in the process singing, into the background. As Carey's multi-octave voice has always been her calling card, the one thing that even her biggest critics have grudgingly acknowledged as her unassailable strength, this is a little odd -- especially on the T-Pain duet "Migrate," where she succumbs to auto-tune -- but it not only makes Mariah modern, it also camouflages her slightly diminishing range, so it does have a dual purpose. Sometimes all this production is good and occasionally it's married to a full-fledged, hooky song, as on the excellent "I'm That Chick," a sleek slice of Off the Wall disco that's nearly giddy in its energy and melody, and perhaps on "I'll Be Lovin' U Long Time," which also has a lightness that so much of E=MC2 lacks. Everything else pushes the rhythm and bass to the forefront and mixes Mariah into the middle, so it becomes a wash of sound -- sound that is designed to be fashionable, but like so much fashion, it's tied to the time and dates quickly. Which is why it's misleading to judge Mariah based on her new record of possessing the most number one singles, as she's not about longevity, she's about being permanently transient, a characteristic E=MC2 captures all too well. ~ Stephen Thomas Erlewine, Rovi