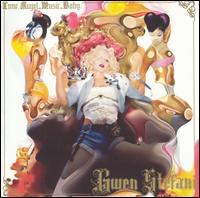 In the wake of Gwen Stefani's elevation to diva status in the early 2000s, it's easy to forget that for a brief moment at the start of the millennium it seemed that she and her band, No Doubt, were dangerously close to being pegged as yet another of the one-album alt-rock wonders of the '90s. Return of Saturn, their long-awaited 2000 follow-up to their blockbuster 1995 breakthrough Tragic Kingdom, failed to ignite any sparks at either retail or radio, despite receiving some strong reviews, and the group seemed on the verge of disappearing. Then, Gwen sang on Eve's "Let Me Blow Ya Mind" in 2001. The Dr. Dre-produced song was a brilliant single, driven by a G-funk groove and a sultry pop chorus delivered by Stefani, and it was an enormous hit, peaking at number two on the Billboard charts and winning a Grammy, while redefining Gwen's image in the process. No longer the cute SoCal ska-punk kid of Tragic Kingdom, she was a sexy, glamorous club queen, and No Doubt's next album, 2001's Rock Steady, not only reflected this extreme makeover, it benefited from it, since her new ghetto-fabulous persona turned the album into a big hit. A side effect of this was that Gwen now had a higher profile than her band, making a solo album somewhat inevitable. Since she always dominated No Doubt -- she was their face, voice, lyricist, and sex symbol, after all -- it's reasonable to ask whether vanity was the only reason she wanted to break out on her own, since it seemed to the outside observer that she helped set the musical course for the band.

A quick listen to Love.Angel.Music.Baby., her 2004 solo debut, reveals that this is not an album she could have made with the group -- it's too club-centric, too fashion-obsessed, too willfully weird to be a No Doubt album. Working with far too many collaborators -- including Dr. Dre, the Neptunes, Linda Perry, Dallas Austin, André 3000, Nellee Hooper, Jimmy Jam & Terry Lewis, and her No Doubt bandmate (and ex-boyfriend) Tony Kanal -- Stefani has created a garish, neon-colored, deliberately stylish solo album that's intermittently exciting and embarrassing. It covers far too much ground to be coherent, but a large part of its charm is to hear it careen from the thumping, minimal beats of the Neptunes-helmed "Hollaback Girl" to the sleek, new wave textures of the high school anthem-in-waiting "Cool" and back to the exhilarating freakazoid sex song "Bubble Pop Electric," featuring André 3000's alter ego Johnny Vulture. This is music that exists entirely on the surface -- so much so, that when André drops in Martin Luther King samples into the closer, "Long Way to Go," it's a jarring buzz kill -- and that's what's appealing about L.A.M.B., even if it is such a shallow celebration of fleeting style and outdated bling-bling culture, it can grate. This shallowness can result in intoxicating beats, hooks, and melodies, but also a fair share of embarrassments, from odes to "hydroponic love" and choruses built on either "That's my s*it" or "take a chance, you stupid ho" to the stumbling contributions from Linda Perry. But Stefani's dogged desire to cobble together her own patchwork style while adhering to both her new wave chick and urban goddess personas can be both fascinatingly odd (her weirdly homoerotic tribute to "Harajuku Girls") and irresistible. It's telling that the best moments on the album keep closest to her new wave roots (which include heavy electro synth beats and blips): no matter how hard she tries, she is not a cultural trailblazer like Madonna. Unlike Madge, she willingly adapts to her collaborators instead of forcing them to adapt to her, which means that L.A.M.B. truly does sound like the work of seven different producers instead of one strong-willed artist. Nevertheless, even if it doesn't work all the time -- and some of its best tracks still have moments that induce a withering cringe -- it's a glitzy, wild ride that's stranger and often more entertaining than nearly any other mainstream pop album of 2004. ~ Stephen Thomas Erlewine, Rovi