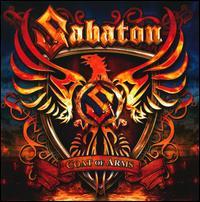 Not all power metal is epic power metal, but there are certain power metal albums that make a point of being as epic as possible -- and Sabaton's Coat of Arms is one of them. Everything about this 2010 release is epic and proud of it; we're talking epic melodies, epic hooks, epic lyrics, and big, fist-pumping epic choruses. Short of Manowar, one would be hard-pressed to find a more epic power metal disc than Coat of Arms. But while a lot of power metal operates in the fantasy realm lyrically, Sabaton's lyrics deal with actual historic events -- specifically, events during wartime. War has been an ongoing obsession of this Swedish band, and most of the songs on Coat of Arms were inspired by things that actually transpired during World War II. Sabaton, in fact, get really specific, addressing the Battle of Britain on "Aces in Exile," the Warsaw Uprising on "Uprising," and the Siege of Baston on "Screaming Eagles." One of the tracks, "The White Death," is an ode to the heroic Finnish sniper Simo Häyhä, who killed hundreds of Soviet soldiers during Finland's 1939/1940 conflict with the Soviet Union. Despite its historic perspective, Coat of Arms still has the overblown campiness of a Hollywood adventure/action movie; if grindcore is the metal equivalent of a slasher flick and gothic metal is the metal equivalent of the darkly romantic gothic horror of Dark Shadows, power metal and progressive metal have often provided the sort of larger-than-life escapism one gets from epic fantasy or science fiction films. But again, Coat of Arms deals with history rather than fantasy, and in that sense, this 39-minute CD has more in common with an epic war film than it does with, say, Peter Jackson's Lord of the Rings trilogy. Sabaton obviously put a lot of thought into Coat of Arms, which, despite its Hollywood-like pomposity, easily qualifies as one of the most intriguing and well-constructed power metal releases of mid-2010. ~ Alex Henderson, Rovi