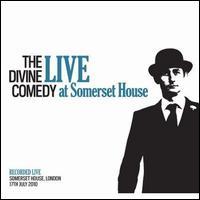 Following the success of his Ivor Novello-nominated Duckworth Lewis Method side project, the elder statesman of grandiose Irish pop, the Divine Comedy's Neil Hannon returns to his day job with the first live album of his 20-year career, Divine Comedy: Live at Somerset House. Showcasing his first new release in four years, the socio-political, satire-heavy Bang Goes the Knighthood -- with its 23 tracks performed solo with only a grand piano or acoustic guitar for accompaniment -- was recorded at one of London's finest buildings in 2010. While his studio albums often recall the lush orchestral arrangements of '60s icon Scott Walker, these unique, live, stripped-back interpretations instead have more in common with the theatrical pop of Rufus Wainwright, allowing the sold-out audience to fully appreciate the cleverness of his lyrics and his rich and peerless Baroque vocals. Nearly all of his previous album, his highest charting since 2001's Regeneration, is included (only "The Lost Art of Conversation," "Island Life," and the title track are ignored), with the inspired segueing of New Order's "Blue Monday" at the beginning of "At the Indie Disco"; his infectious and scathing attack on the financial crisis, "The Complete Banker"; and the Jacques Brel-influenced "Neapolitan Girl," the particular highlights. Elsewhere, the two-hour-plus set also includes several classics which are given a new lease on life thanks to their intimate, acoustic nature; this includes his biggest hit, the jaunty "National Express," the Noël Coward-esque "Everybody Knows (Except You)," and the Michael Caine-inspired "Becoming More Like Alfie." Alongside the more familiar material, there are also a few genuine surprises, such as his rendition of the Casanova album track "Love Songs," also known as the theme song to the brilliant sitcom Father Ted; there's a stately cover version of MGMT's "Time to Pretend," and an encore featuring "Jiggery Pokery," the sole contribution from his intriguing cricket-themed Duckworth Lewis Method album. Hannon remains as charismatic a showman as his late-'90s Chris Evans-championing heyday, a fact which makes several lyrical slips toward the end of his lengthy set easily forgivable. But even though At Somerset House's reliance on the Divine Comedy's lesser-known material is unlikely to appeal to the casual fan, it's undoubtedly a uniquely low-key treat for his devoted fan base. ~ Jon O'Brien, Rovi