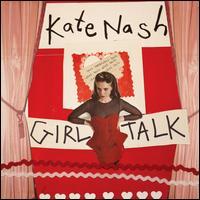 With her 2010 sophomore album, My Best Friend Is You, British singer/songwriter Kate Nash successfully broadened her intimate folk-pop outlook to a more slickly produced, post-Amy Winehouse neo-soul sound. The change intrigued some and displeased others, but overall it proved that Nash (who was only 20 when she recorded her debut) wasn't content to stick to one sound. She was clearly growing up and growing her sound along the way. Nash takes this growth even further on her third studio album, 2013's raw and rambunctious Girl Talk. Dropping the slick production of her previous album, Nash jumps headlong into a punk- and garage rock-influenced aesthetic that has more in common with such distortion-heavy guitar bands as the Raveonettes, the Kills, and the Dum Dum Girls than it does the neo-soul of the late Winehouse. In many ways, the album seems much more like the D.I.Y.-debut of a new indie rock band than the third effort of an established singer/songwriter. Which should not imply that the album is a disappointment. Far from it; Nash seems to finally be coming into her own as a mature, swaggering rock chick with a strong feminist streak to match the punky blonde ones in her hair. Thankfully, while Nash has moved to a more extroverted, aggressive sound, she hasn't sacrificed any of the personal, intimate lyrics that marked the best of her early songs. Tracks like the propulsive "Fri-end?" and the raging "Sister" are straightforward punk-rawk cuts that mix in-your-face attitude with fierce lyrics that find Nash ruminating on the pitfalls of twenty-something relationships so often fraught with jealousies and desires. On "Sister," she sings "It's not fair to watch you walk away like this/I just wish that I could get one more kiss/ But you gave it, you gave it to another/And it's not fair of me to judge that." This theme of the struggle between female empowerment and romantic jealousy crops up throughout the album. Nash even draws inspiration from Quentin Tarantino's 2007 ode to '70s slasher films, Death Proof itself, a kind of treatise on women in genre movies. On Nash's "Death Proof," an echoey, bass-heavy Morricone-esqe cut, she sneers "You can spend your whole life getting down on one thing/You can waste all your time on one idea/You can get your little brain into one big mess/But what you gonna do now, baby, when it all comes down?" For Nash, the answer -- like all of the fiery, rousing songs that make up Girl Talk -- is to own your life and make of it what you want. Perhaps Nash says it best in her song "All Talk," where she croons "Action, action, action! Words are only in my mouth." ~ Matt Collar, Rovi