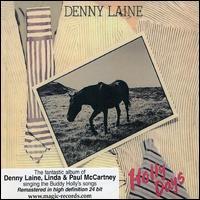 Of the myriad side projects and offshoots which occupied Paul McCartney and Wings during the early to mid-'70s, it is regrettable that this is the only one which came to full fruition -- regrettable because it's also the only one in which Fab Macca had any kind of vested financial interest, thus opening the door for decades' worth of subsequent critics to write it of as just another means of adding more cash to the coffers. Of course, there's no denying that McCartney's acquisition of the Buddy Holly songbook was a prime reason for this collection of, indeed, Buddy Holly covers. But to dwell on that is to overlook the fact that, alongside Wildlife, Red Rose Speedway, and two or three later Wings 45s, Holly Days sounds more like McCartney's original blueprint for Wings than anything else the group accomplished. Laine, Paul, and Linda alone feature on the album, recording in the same Rude studios (the appropriately named Rude Studio where McCartney banged out his demos), and not sounding much more advanced. A note on the sleeve even warns, "this album consists of monophonic recordings, electronically reprocessed to give a stereo effect," and anyone familiar with any of the Beatles' own early-'60s recordings will know exactly what that sounds like. Holly Days is crude, ramshackle, and impossibly primitive, then, but its naïveté is its strength, its amateurism is its armor. It's the sound of three musicians having fun with songs that they love, eschewing effects, ignoring mistakes, and cherishing the lo-fi brashness of it all. Laine's lead vocals are excellent, the McCartneys' harmonies are spot-on, and the musicianship -- mainly Paul -- is supremely slapdash. The result, for anybody wishing to seriously anthologize McCartney's solo output, is an album as honest as any he's been involved in, and a lot more fun than most of them. Holly Days -- happy days! ~ Dave Thompson, Rovi