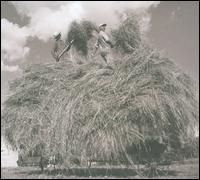 On 2009's Animals in the Dark, Iowa singer and songwriter William Elliott Whitmore departed from his usual tack of documenting life, death, and the landscape in rural America, and took on George W. Bush's administration and its policies. Armed with only a banjo, a guitar, and a drum, the album's songs used history to illustrate how Americans traditionally confront tyranny. On first listen, Field Songs may seem more related to the concerns of his earlier trilogy of recordings; one whose focus expresses only the necessity of returning to life's basics as seen from the front porch of a farmhouse. It's where this album begins and ends geographically. That said, Field Songs, structured as an eight-song cycle to be taken in one sitting, has implications that are far wider--it contains the entire world. With the sound of actual field recordings of birds and crickets chirping throughout these songs, a grander vision unfolds. It begins with "Lay Your Burdens Down," where Whitmore urges the listener to shed what holds her back and uses his own history to illustrate the consequence of not doing so. His strummed banjo links a chain from ancient griots and farmers to survivors of war and poverty, to prisoners and all oppressed people in asking the question: "How long can this night time last?" In "Field Song," driven by a choppy, percussive guitar, Whitmore remembers "three square meals and a livin' wage" as the "good old days," before the "Manifest Destiny of the factory farms." He even asserts "much was lost when the West was won," that the gilded age is over; the best of times have yet to come if only we get into the field and do the work. What work? It may be building a house with our own hands, or it may be organizing with others. What is illumined in "Let's Do Something Impossible" is the example of Paris in 1943 (the year the French Resistance was established under Nazi occupation), the escape from Alcatraz by Theodore Cole, and Little Big Horn as metaphors for a future revolution. In "Get There from Here," and "We'll Carry On," these are underscored as not being dreams, but possibilities. They are resolved in the closer "Not Feeling Any Pain" where, via an amplified guitar and a drumbeat, Whitmore's protagonist ruminates -- from the front porch -- on the satisfaction that a new era will be born when the current metaphorical and historical day's work is done. By using numerous historical and societal references in these songs as signifiers, and small actions that resulted in large changes, Field Songs is 21st century folk music in the literal sense because it is linked to folk's tradition of social conscience across racial and class barriers. Summarily, it is a companion to Animals in the Dark because it charts what's possible when rage blossoms into activism: resistance, refusal, collective cooperation -- all start out small (it doesn't get much smaller than the front porch) in a commonly shared vision that results, hopefully, in the creation of something new. Field Songs is Whitmore's masterpiece thus far: unflinching, stubborn, demonstrative, and inspiring. ~ Thom Jurek, Rovi