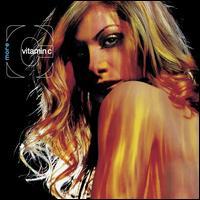 Vitamin C's first album was pitched directly at junior-high and high-school kids, to the point that its breakthrough single, "Graduation (Friends Forever)," was pumped full of yearbook clichés. Perhaps it shouldn't be a surprise that she wanted to spice up her image with her second album, More, adding a little more sex and sophistication -- two things that are only appropriate for a singer closing in on 30. While the title implies this is another ride on the teen pop merry-go-round, More winds up having more style and substance than its predecessor. Vitamin C isn't afraid to be either slyly witty or to celebrate her new wave roots, not just on the cover of the Waitresses' "I Know What Boys Like," but in the general frothy, synthesized approach of the entire album (highlighted by the near-robotic vocals on "She Talks About Love"). Much of this music is lightweight, but deliberately so, and, at its best, such as "Dangerous Girl," its bright, shiny attitude is utterly giddy. Vitamin C isn't content on making effervescent, featherweight pop singles; she wants to sex it up a bit, vamping on occasion (such as on the lead single, "The Itch"), and, with "Sex Has Come Between Us," she gives into a platonic friendship turned romantic (unlike Britney, who just teased on "Oops! I Did It Again"). There's no mistaking this for anything other than a dance-pop record, yet it's made by an artist that is (thankfully) a little too old for teen pop. She's in on the joke, playing with the conventions, adding a touch more wit, both in the music and lyrics, as well as more classicist pop songcraft. That doesn't mean that this is as purely pop as Fountains of Wayne, but it's easy to see this becoming a guilty pleasure for that group's fans. And they may even wind up embracing its knowing approach to teen pop more than teens themselves. ~ Stephen Thomas Erlewine, Rovi