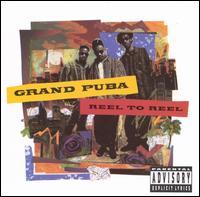 In a sense, Grand Puba really never was a genuine member of Brand Nubian. He was several years older than Lord Jamar and Sadat X, and had already recorded with the old-school crew Masters of Ceremony several years before finally hooking up with his younger mates. And even the mostly collective-minded One for All featured a couple Puba solo joints. Based on the sophomore Brand Nubian outing, it is pretty clear that Grand Puba's carefree verbal play, completely unencumbered by ideology, tempered the more in-your-face manifestation of Jamar and Sadat X's radical politics since In God We Trust which, as thrillingly polemical as it could be, was also rather severe and uncompromising, even apocalyptic, in its outlook, and therefore off-putting at times. Likewise, based on this debut solo album, it's clear that Brand Nubian created precisely the right context in which Puba's self-reflexive braggadocio could flourish without wearing thin because Reel to Reel, as much fun as it is, has little in the way of substance. As a result, the record never becomes more than a pleasing divertissement. Minus any counterweights who can "drop the science," Puba, like some sort of hip-hop Dolemite, proved to be interested mostly in self-puffery, partying, and playing the ladies. While the persona is entertaining as far as it goes, it doesn't have a lot of mileage in it unless you have a high tolerance for tall tales about stunts and blunts. The artist himself had a good time satirizing this penchant at the beginning of the classic "Wake Up" from One for All, but seems to have lost sight of some of the possibilities for self-parody here. Having said that, the album really does have a lot to offer, including the irresistible one-two punch of "Check Tha Resume" and "360°," the deep-fried "Honey Don't Front," and the delightfully lazy "Who Makes the Loot?," whipped off with Brand New Heavies when they were at their funkiest. The production (most of it by the artist himself) is universally excellent, and Puba is, without a doubt, one of the cleverest, most cheekily complex MCs to ever pick up a microphone. Just bring your incredulity and sense of humor -- the lower the brow the better -- and Reel to Reel is a real hoot. ~ Stanton Swihart, Rovi