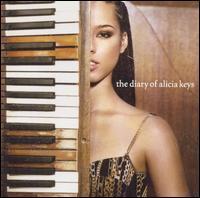 The Diary of Alicia Keys

Since Alicia Keys' 2001 debut album, Songs in A Minor, was ever so slightly overpraised, expectations for her second album, 2003's The Diary of Alicia Keys, were ever so slightly too high. Songs in A Minor not only kicked off a wave of ambitious new neo-soul songsters, it fit neatly into the movement of ambitious yet classicist new female singer/songwriters that ranged from the worldbeat-inflected pop of Nelly Furtado to the jazzy Norah Jones, whose success may not have been possible if Keys hadn't laid the groundwork with such soulful work as her hit "Fallin'." Such success at such a young age, even if deserved, can be too much too soon, since young songwriters showered with praise and riches may find it hard to see the world outside of their own cocoon. The very title of The Diary of Alicia Keys -- at once disarmingly simple and self-important -- suggests that Keys, like Furtado, took her stardom a little too seriously and felt compelled to present her worldview unfiltered, dispensing with artistic ambiguities and leaving each song as a portrait of Alicia Keys, the woman as a young artist. As she somewhat bafflingly says in her liner notes, "these songs are like my daily entrees," which likely means that these were indeed intended to play like unedited entries in a journal, a goal that she's fulfilled quite successfully, even if it does mean that the album often plays as a diary, leaving listeners in the role of observers instead of seeing themselves in the songs. This was a problem on Furtado's nearly simultaneously released Folklore, but Keys trumps her peer in one key way -- musically, this is a seamless piece of work, a sultry slow groove that emphasizes her breathy, seductive voice and lush soulfulness. Tonally, this is ideal late-night romantic music, even when the tempos are kicked up a notch as on the blaxploitation-fueled "Heartburn," yet beneath that sensuous surface there is some crafty, complex musicality, particularly in how Keys blurs lines between classic soul, modern rhythms, jazz, pop melodies, and singer/songwriter sensibility. It's an exceptionally well-constructed production, and as a sustained piece of sonic craft, it's not just seductive, it's a good testament to Keys' musical strengths (which can even withstand Andre Harris and Vidal Davis' irritating squeaky voice production signature on "So Simple"). What the album lacks are songs as immediate as "Fallin'" or as compelling as "A Woman's Worth," and that, combined with her insular outlook, is where Diary comes up short and reveals that it is indeed merely a second album. Such is the problem of arriving with a debut as fully formed as Songs in A Minor at such a young age -- listeners tend to expect more from the sequel, forgetting that this an artist still in her formative stages. So, those expecting another album where Keys sounds wise beyond her years will bound to be disappointed by The Diary of Alicia Keys, since her writing reveals her age in a way it never did on the debut. Yet that is a typical problem with sophomore efforts, and while this is a problem, it's one that is outweighed by her continually impressive musical achievements; they're enough to make The Diary worth repeated listens, and they're enough to suggest that Keys will continue to grow on her third album. ~ Stephen Thomas Erlewine, Rovi