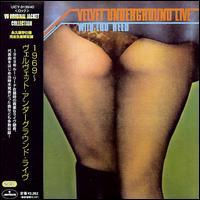 Sadly, outside of a handful of audience tapes of extremely variable fidelity, no one thought to make a live recording of the Velvet Underground during their 1967-68 peak period with John Cale prodding Lou Reed into remarkable flights of noise-rock fancy. However, in 1969 a VU fan who was a recording engineer brought a reel-to-reel tape machine to two shows the band played during an engagement at a club in Dallas called The End of Cole Avenue; a few months later, the band played The Matrix in San Francisco, where a tape machine had been installed into the hall's sound system, and the band was allowed to record their set. Five years later, long after the Velvet Underground had collapsed and Lou Reed's solo career was on the rise, Mercury Records compiled highlights of the Dallas and San Francisco tapes into a two-record set, 1969: Velvet Underground Live, and it is without question the best (legally-released) document of this band's considerable strengths as a live act. While they were a somewhat more sedate band with Doug Yule on bass rather than Cale, they still had plenty of life left in them at this stage of the game; there are few voyages into the sonic unknown here, but Lou Reed and Sterling Morrison had matured into one of rock's most potent guitar combinations, Maureen Tucker was as distinctive a drummer as anyone who picked up a pair of mallets, and with Doug Yule at her side they comprised a truly superb rhythm section. Sounding tight, confident, and passionate on every cut, this set finds the band visiting highlights from all four of their studio albums, as well as a handful of previously unreleased numbers. From the delicacy of "New Age" and "I'll Be Your Mirror" to the rave-up energy of "What Goes On" and "White Light/White Heat," 1969: Velvet Underground Live captures the many sides of their musical personality with commendable skill, and while it isn't their best album, it's one of the best places for a beginner to explore their body of work. [For CD release, Mercury unfortunately divided 1969: Velvet Underground Live into two separate albums, 1969: Velvet Underground Live, Vol. 1 and 1969: Velvet Underground Live, Vol. 2; thankfully, both were budget priced, and bonus tracks were added to each.] ~ Mark Deming, Rovi