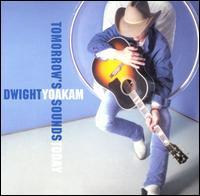 The title has to be a goof because this album, as well as Dwight Yoakam's entire catalog, should be dubbed "Yesterday's Sounds Today." The only connection Yoakam retains to the slick, crossover, big-hat crowd is the big hat, and these 14 tracks prove that even as country music continually evolves into glossy pop, this artist has entrenched himself in all things retro. The crying steel guitars, jaunty mandolins, and plaintive fiddles that drive this rootsy country & western could have been recorded in the 1950s, and only the tasty electric guitar licks of longtime producer/cohort Pete Anderson bring the music up to date. Further cementing his connection with the classic Bakersfield sound, Yoakam invites founding father Buck Owens to join the fold once more (their 1988 collaboration produced a number one C&W hit with "The Streets of Bakersfield") and the resulting three tracks yield results just as winning. Yoakam goes the Hank Williams Sr. route on "A Promise You Can't Keep" and especially "The Heartaches Are Free," which sounds so similar to a Hank Sr. tune in melody and vocal inflection, you'll find yourself double checking the liner notes to be sure it's a Yoakam original. The singer dips into his '70s classic rock roots again too, as he follows up his wildly successful Queen remake with a cover of Cheap Trick's "I Want You to Want Me." Like his interpretation of "Crazy Little Thing Called Love," he makes it sound like an obscure barnstorming country track instead of the power pop nugget it is. Ten of the album's 14 tunes are self-penned and song titles like "A World of Blue," "A Place to Cry," "The Sad Side of Town," and "Time Spent Missing You" show that Yoakam is still drenched in the spilt tears, heartbroken brand of country that has proven to be so lucrative, artistically and commercially, in the past. Best of all, he makes it seems easy. Even though there's little stylistic maturation in his approach since his first release in 1986, Yoakam's songwriting craft keeps improving, and any track from this album could be a hit single. With Tomorrow's Sounds Today, Dwight Yoakam has fashioned a contemporary roots-conscious country album whose qualities, like the artist's distinctive style, are timeless. ~ Hal Horowitz, Rovi