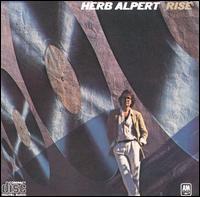 If the 12" single of Herb Alpert's "Rise" hadn't taken over the charts the way it did back in 1979, one wonders if anyone would have gotten around to checking out the Tijuana Brass, or if Alpert would have gone down in the books as the guy who had a number one with a Burt Bacharach tune ("This Guy's in Love with You"). Instead, the cut energized the entire dance club generation with DJs looking for new grooves and even ended up being used by Sean "Puffy" Combs on the Notorious B.I.G.'s Hypnotise, albeit in a drastically re-morphed form. The single began as a disc track composed by Alpert's nephew Randy and his pal Andy Armer. Alpert suggested they slow the groove way down and turn it into a slow mover. They issued it without an album to go with it, simply as a single on A&M. Club DJs picked up on it and began using duplicate copies either to let the percussion break go on a bit longer before trumpet kicked in, or playing one copy just behind another, creating a call and response melody with the trumpet and the rhythm section. After the single stormed the charts and stayed there all summer, eventually hitting the number one spot, Alpert, Armer and friends went about assembling an album to capitalize on it.

They did well: Rise hit number six on the Billboard pop chart. The rest of the tracks are a slew of originals and covers. The set opens with a small pomp and circumstance intro called "1980" that Alpert composed for the Olympics that year, assisted by the late Michel Colombier on keyboards. Alpert also composed the ballad-turned-Latin-dancefloor fire walker "Behind the Rain," (originally composed for Gato Barbieri's Caliente! album) that has its own appeal in the 21st century with chorus-like backing vocals. Other tracks include the Armer and Randy Alpert "Rotation." This cut, introduced by hand percussion, bells and shakers is another soulful groover with a killer, soft-spoken keyboard line that's lite funk and hypnotic. A looped synth line enters in place of a bassline. Handclaps, fingersnaps, and Alpert's trumpet from the distance play a melody not unlike the one on the "Lonely Bull." Effects, washes, reverb, and mild distortion create a futuristic backdrop to this otherwise beautifully melodic tune. Alpert plays his in the pocket soul-drenched melody lines over the top and one of the first "chillout" tunes was born. The 2007 version of the album includes an alternate version with digital delay on the trumpet as a bonus track. Speaking of bonus cuts, Alpert recorded an updated version of Rodrigo's "Aranjuez" introduced by a steel string playing the flamenco intro and backed by hand percussion and the popping bassline of Jerry Knight to full-on 1/2 disco tempo, creating another melodic classic for the floor complete with marimba played by Julius Wechter from (where else?) the Tijuana Brass! The handclap and vocal whoop-up in the middle adds to the celebratory nature of this version. By its end the tune is unrecognizable and has become a disco anthem with strings, with Steve Schaeffer beating the hell out his kit and keyboard loops layered on top of one another. It's still an amazing thing to hear nearly 30 years later. There is a brand new mix of the cut contained on the 2007 edition.

Alpert, wanting to charge the disco scene, had re-recorded the Crusaders' "Street Life" with Joe Sample on piano amid the synthetic keyboards. The marimba adds to the vibe and the slowed downtempo, as the melody is ushered in by strings before Alpert starts blowing his tight, sharp little vamps. Sample's piano is a solid accompaniment to James Jamerson, Jr.'s bass playing, and the whole thing rivals the Crusaders' version because of the deep, soulful melody in Alpert's playing. And who would have ever thought the prog rocker Pete Sinfield and Procol Harum's Gary Brooker's tune "Angelina" (recorded for Brooker's first solo album) would end up here as a faux calypso tune with a pedal steel guitar in it? The studio was the lab and everything was possible then, though hearing it now it's amazing they could accomplish all this back then. What this leaves is "Love Is," penned by Bill Withers, and delivered here rather anemically by Alpert. But it isn't the vocal that sells this, it's the drop dead bassline by Louis Johnson and the woven-in keyboard lines. Alpert plays fills around and through his vocals and turns the song into an anthem of celebration. What it all adds up to is an extraordinary recording that stands the test of time as a bona fide classic of the late disco/pre hip-hop era. The pop charts would have none of it these days. But eating this up as folks did, pre-MTV, with simply the radio going nuts trying to introduce the next single from it, Alpert, his nephew, and Armer stumbled onto something that would reinvigorate Alpert's career as a recording artist and as a producer. [Rise was reissued with the bonus tracks mentioned above in 2007.] ~ Thom Jurek, Rovi