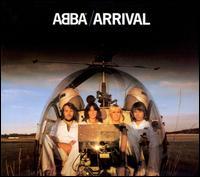 ABBA's fourth album appeared after the group had arrived as major stars shows the quartet at the absolute top of their game. In addition to "Dancing Queen," which is probably their best-known hit (a number one single on both sides of the Atlantic), the record was filled with brilliant material, including the spirited "When I Kissed the Teacher"; the dramatic, achingly beautiful "Knowing Me, Knowing You" (yet a further hit); the pounding "Money, Money, Money" (still another hit off the album); and the playful "That's Me." Arrival was reissued in October of 2001 in a 24-bit digital transfer, in a handsome gatefold package with two bonus tracks added on. The upgraded sound puts the piano on "Dancing Queen" practically in the room with the listener, and the rhythm guitars by Björn Ulvaeus and Lasse Wellander on "Knowing Me, Knowing You," "When I Kissed the Teacher," and "Dum Dum Diddle" are up very close. The other big beneficiaries are Rutger Gunnarsson's muscular bass playing throughout the album, which never sounded sharper or more effective, and Benny Andersson's keyboards everywhere, which have real presence. Wellander's power chords over the chorus of "Knowing Me, Knowing You" are some of those dramatic musical effects that this group played for maximum effect, which gave their music a raw power that their detractors usually overlooked; in the new edition, it's impossible to ignore. What's more, the sheer impact of the bass drums behind the choruses on "Tiger" will be pretty impressive to any noise freaks. And all of the voices are in very sharp relief; every iota of richness is now on display. So one can now fully appreciate what Frida Lyngstad was hearing when she found the playback of the backing track on "Dancing Queen" beautiful enough to cry over the first time she heard it. The two bonus cuts are both choice additions: the lost B-side, "Happy Hawaii," is a soaring, rocking dance number that got left off the album, and the chronologically related single "Fernando" had been recorded during the making of the LP but not included on it in most of the world. The latter is a profoundly beautiful song that, with its use of flutes and a folk-like melody, is a sort of disco-era follow-up to Simon & Garfunkel's "El Condor Pasa." ~ Bruce Eder, Rovi