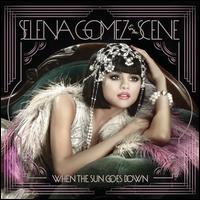 When the Sun Goes Down

You’d be forgiven if you thought Selena Gomez & the Scene’s third album in three years, 2011's When the Sun Goes Down, might show signs of a dip in quality control due to cranking out albums so quickly. You’d be wrong, though, because When the Sun Goes Down is actually an improvement over 2010's Year Without Rain. Where that record tried to position Gomez as a more serious and adult artist with varying levels of success, here she’s back to mostly being a young and breezy, happy-go-lucky pop singer. With a couple exceptions, the songs are sassier, lighter, and more fun. Her vocals are more spirited, the arrangements less reliant on heavy synths, and overall, there’s a more playful feeling to the record that’s more in keeping with her first album. She bubbles her way through dancefloor-friendly tracks like “Bang Bang Bang” and “That’s More Like It,” smolders a little (on her duet with Pixie Lott “We Own the Night” and "Middle of Nowhere"), and comes on like a convincing disco diva on “Hit the Lights.” The only stumble is the overly earnest empowerment anthem “Who Says,” which comes off a little stiff and out of place. It’s a tiny speck of a flaw though; the rest is really solid and fun modern pop with sharp hooks and a couple surprises, namely the stomping jam “Whiplash,” which channels Goldfrapp’s electro glam and throws in a charmingly odd spoken word section that for some reason is done with a British-y accent. It adds some welcome weirdness to an otherwise straightforward record, and shows how easily and successfully she can slip into different personas and styles. Perhaps a bit too easily, as ultimately, Gomez has yet to stake out an identify all her own: a point driven home in the album’s booklet, which features Gomez in a series of images of her in different guises, from Ann-Margret-style sex kitten to 1930s film star. She seems to be acting out the songs, more than actually feeling the emotions she’s singing about. Which is perfectly fine for disposable pop albums, but if she wants to make a real impact, she’ll need to dig a little deeper or stake out her own territory. That’s for the future, though. For now, as long as she makes records as good and as much fun as When the Sun Goes Down, everything will be fine. ~ Tim Sendra, Rovi