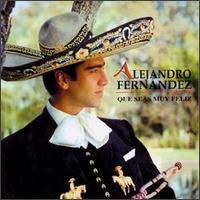 Alejandro Fernandez already had one ranchera classic under his belt -- his exceptional debut album -- when Que Seas Muy Feliz came out. But this was the record where everything came together. The inherent elegance of Fernandez's voice was matched with the most distinctive songs and arrangements of his career to date, along with the warm, enveloping mix of strings and distant trumpets, the signature of omnipresent producer Pedro Ramírez who, during the early '90s, repeatedly coaxed astonishingly natural sounds from nascent digital technology. This was lavishly packaged with photos of Alejandro in a charro suit. Where he had initially been packaged as a sort of pretty boy, and had looked slightly out of his element on the cover of his preceding disc -- a full-out ranchera standards affair -- the cover of Que Seas Muy Feliz shows a man fully aware of his iconic folk identity (whether that was actually his identity one cannot know), wearing his elaborate mariachi outfit as naturally as one would Sunday afternoon fancy dress. The cover seemed to be making the statement that there was going to be more gravity in this collection of songs, that here Alejandro would step outside of the shadow of his father (which, of course, he had already done) and simultaneously claim his place as practitioner of a grand tradition of serious music, and that ranchera was Mexico's classical music, not simply its folk music. But actually, the difference between this disc and what preceded and came after it is quite subtle. Maybe it is just the packaging and the sequencing, but for some reason, this is Alejandro's ranchera disc for the rest of the world.

You might not think that as you listen to the somewhat whiny jealousy ballad that opens the disc, "Que Bueno," although it's catchy as all get-out. But by the time the trio of closing songs -- "La Mitad Que Me Faltaba," "Que Seas Muy Feliz," and "El Potrillo" -- finishes, you know you have heard something special. The last song, which is a tribute to his father and, well, to himself as well, contains a tour de force arrangement that seems to float on air and experiments with modern dissonance (a sharp ninth in the dominant). The impressive thing about this track is that Alejandro conveys the emotion of a son without seeming too mawkish about it. That goes as well for his take on "Paso del Norte," as good a version as one is ever likely to hear. Alejandro disappears from the track altogether. The soaring melody and the national pride that leaven the bitterness of the lyrics are just right. It's almost operatic. Finally, there is the big hit from the disc, and perhaps Alejandro's best song, "Como Quien Pierde una Estrella," which is another thrilling compromise between passion and control, the ranchera for the new generation. In the past, Alejandro's records were about him. This is the first record where one starts to think, it's not about him, it's about the music. That notion does not often come to mind listening to his early-21st century output, even as he still made excellent records with Ramírez. This disc is suffused with a magic that he would rarely recover. ~ J. Chandler, Rovi