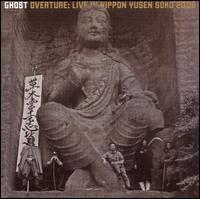 This two-disc package showcases the mysterious majesty that is Japan's Ghost in new ways to American audiences. Containing one CD and a companion DVD, Overture: Live in Nippon Yusen Soko 2006, documents a single evening performance at a former warehouse space that has been converted into an art gallery. The band lined up in parallel in front of the audience, hidden from them and one another by large draped lace screens. Not being able to see one another, this set is an improvisation, one track, 56 minutes. It is slowly evolving, mysterious, haunting in places, noisy in others. It begins ominously and slowly, creeping, and is never hurried. At first just some percussive sounds and single guitar notes, eventually everything from reeds and woodwinds, stringed instruments, and throat singing to chanting, as well as other instruments which are introduced and disappear. Apparently the performance begins in complete darkness and no one was allowed to enter or exit; eventually a light show takes over and adds to the performance exponentially. The bottom line is there are far worse ways to spend the better part of an hour. This is the improvisational process not as wankery, but as creation. Ghost actually make music here, not noise, or just noise. Where the volume and chaos do pick up, they are still held within a dynamic center of tension and release, and texturally the music ebbs and flows. Watching the DVD, which is 36 minutes longer than the CD -- the entire performance is captured in three convenient chapters, and was not edited -- is a quiet revelation; it's trippy, dark, murky, and utterly beautiful all at the same time. It's artful as well as arty; it has nothing to do with rock & roll, and even the mighty guitarist Michio Kurihara reins himself in. This is psychedelic music to be sure, but in an inverse sense, it does not project itself onto your mind, rather, you do that yourself, inwardly as the music and/or DVD play through. It's a remarkable document, and three cheers to Drag City-Ghost's American label for releasing such a handsome and reasonably priced document. ~ Thom Jurek, Rovi