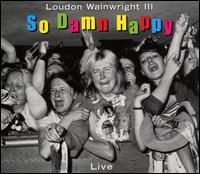 So Damn Happy was Loudon Wainwright III's third live album, following 1979's A Live One and 1993's Career Moves (and not counting 1975's half-live Unrequited and 1998's collection of airchecks, BBC Sessions). Of its 17 songs, one, the autobiographical "Westchester County," first appeared on 1983's Fame and Wealth (and reappeared on Career Moves); another, "The Home Stretch," came from 1986's More Love Songs; four came from 1992's History; three from 1995's Grown Man; two from 1998's Little Ship; one, "Tonya's Twirls," from 1999's Social Studies; and five were new. (The Last Man on Earth, the album Wainwright was promoting on the January 2002 tour from which the performances were culled, was not tapped for any songs.) Performing at Largo in Los Angeles and at the Mystic Theater in Petaluma, CA, Wainwright was able to call upon a few key sidemen, David Mansfield, Richard Thompson, and Van Dyke Parks, for unobtrusive accompaniment, and his daughter Martha joined him in singing the caustic new song "You Never Phone." As usual, the material ranged from the touching to the hilarious, sometimes in the same tune. "Much Better Bets," the newly written leadoff track, was one of Wainwright's patented romantic laments. "Cobwebs," a request from the audience first heard on Grown Man and concerning that four-letter word starting with "L" so frequently used by the younger generation ("an audible pause," among other things, according to Wainwright), was a tongue-twister to which he couldn't get the lyrics straight, though the point was still made. And "Tonya's Twirls," though seemingly a topical song whose time had long since passed, continued to work whether one recalled Tonya Harding or not. Those were only the highlights of a disc that demonstrated Wainwright's wit was still sharp in his fourth decade of work. ~ William Ruhlmann, Rovi