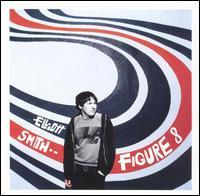 Judging only by his earlier, bare-bones indie-label albums, it seemed highly unlikely that Elliott Smith would turn into the ambitious arranger and studio craftsman of his lushly textured Dreamworks debut, XO. A big part of that shift, of course, was the fact that Smith had major-label finances and equipment to work with for the first time; this allowed him to fuse his melancholy, slightly punky folk with the rich sonics of pop artists like the Beatles and Beach Boys. Smith continues in that direction for the follow-up, Figure 8, an even more sonically detailed effort laden with orchestrations and inventive production touches. With a couple of exceptions, the sound of Smith's melancholy has largely shifted from edgy to sighingly graceful, although his lyrics are as dark as ever. Even if the subject matter stays in familiar territory, though, the backing tracks are another matter -- a gorgeous, sweeping kaleidoscope of layered instruments and sonic textures. Smith fleshes his songs out with assurance and imagination, and that newfound sense of mastery is ultimately the record's real emphasis; there's seemingly a subtle new wrinkle to the sound of every track, and yet it's all easily recognizable as trademark Smith. Even if it is a very impressive statement overall, Figure 8 isn't quite the masterpiece it wants to be -- there's something about the pacing that just makes the record feel long (at over 52 minutes, it is the longest album in Smith's catalog), and it can sometimes float away from the listener's consciousness. Perhaps it's that Smith's songwriting does slip on occasion here, which means that those weaker tracks sink under the weight of arrangements they aren't equipped to support. Still, most of the songs do reveal their strengths with repeated plays, and it's worth the price of a few nondescript items to reap the rewards of the vast majority. Fans who miss the intimacy of his Kill Rock Stars records won't find much to rejoice about here, but overall, Figure 8 comes tantalizingly close to establishing Elliott Smith as the consummate pop craftsman he's bidding to become. [The Japanese release adds "Because" and "Figure 8."] ~ Steve Huey, Rovi