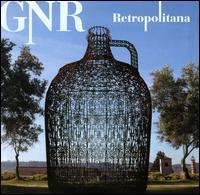 Updating regular Euro-rock of the kind polished to shiny perfection by Enrique Iglesias is trying work, especially when your interests range all over the place, from weepy mainstream emo to lounge crooning, as is the case with the evergreen GNR. But the band runs the gamut of styles skillfully enough for its real core sound to remain mostly elusive; the opener, for example, sounds like a NX Zero sentimental ballad, but soon after come the restaurant jazz tunes, the bouncy new wave pop, and the midtempo rock cuts just a bit too drowsy for power pop, Wet Wet Wet rip-offs, smooth synthesizer lines and all, fit together nice and clean as pieces in yesterday's jigsaw puzzle. And yet the gleefully romantic, almost sleazy nature of most of these songs shines through the modern coating on most of the cuts on Retropolitana, giving it the vibe of an '80s pop album reconstructed from scratch two decades later. It retains its self-centered drama untouched by irony, and isn't ashamed of its own commercial aspirations, which it tries to realize with blatant emotional manipulation, whether hooks when the band can come up with them, or maudlin melodies when it can't. However, that's not all there is to Retropolitana. It may be a reimagining of old stuff, but it's done by people who are good at it; better, in fact, than GNR themselves seem to realize, because they don't use their own talents to the fullest. Here and there the group goes beyond regular pop, using stuff like flutes and techno breaks, throwbacks to the Beatles and futuristic psychedelia to turn kitsch into elegant simplicity and sappiness into melancholy reminiscent (not incidentally) of Portuguese fado. None of this lasts over 30 seconds, but it sure improves the album's aftertaste. ~ Alexey Eremenko, Rovi