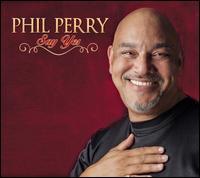 Vocalist Phil Perry has been underappreciated since leaving the Montclairs. His fine recordings with Kevin Sanlin were criminally ignored in the 1980s, and while he's occasionally scored on Billboard's R&B and contemporary jazz charts, he's better known as a session vocalist than as a soloist. Say Yes, issued by Shanachie, finds Perry in somewhat familiar territory. Once more working with producer Chip "Big Dog" Davis, he puts his indelible signature on some vintage tunes rounded out by originals. The set opener is a cover of Sam Cooke's immortal "You Send Me." He introduces it with a reverent take on Cooke's version adorned by jazz piano and strings, but transitions to a shimmering Rhodes, a lone cello, wah-wah guitar, and loops while retaining the phrasing. It's a beautiful update. For a reading of "Where Is the Love" with Chante Moore, the pair's voices blend well, recalling the vintage classiness of Roberta Flack's and Donny Hathaway's hit, though the production is geared to adult contemporary R&B and contemporary jazz audiences. It features a nice flute solo by Najee. "Tonight Is Just Me and You" is an original, with Dawn Tallman's backing vocals underscoring Perry's crystalline, sensual delivery highlighted by Najee on soprano sax. There are fine readings of Michael McDonald's and Carly Simon's "You Belong to Me," with Donnell Smallwood on backing vocals and a radical, yet moving take on Lennon's and McCartney's "The Long and Winding Road," that turns the nugget into a prime contemporary jazz vehicle. The title track, another original, is a slow bubbling babymaker, while "Peel the Veil," with its hint of a Middle Eastern melody, is tucked inside a beautifully crafted jazz ballad. The set closer is a modern gospel version of Paul Simon's "Bridge Over Troubled Water," which is anything but solemn. Davis' arrangement is lively yet dignified. Perry revels deep in his gospel roots, infusing them with bluesy retro-soul as a backing chorus lifts him and the tune into the stratosphere. While Say Yes is quite polished, the production never gets in the way of Perry's voice. The choice of material is well considered; it's tailored to his elastic, signature phrasing and clean yet expressive emotional delivery. ~ Thom Jurek, Rovi