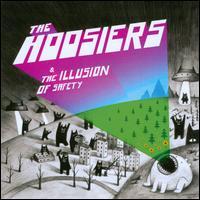 The Illusion of Safety

Having jumped on the prog-pop revival bandwagon kick-started by the Feeling in 2007, Anglo-Swedish trio the Hoosiers could have been forgiven for sticking to the "if it ain't broke, don't fix it" attitude following the success of their chart-topping debut, The Trick to Life, and their two huge airplay hits, "Worried About Ray" and "Goodbye Mr. A." However, for follow-up The Illusion of Safety, they've wisely eschewed the often irritating overly quirky nature of their falsetto-led first offering in favor of a much more contemporary synth pop sound, which has more in common with the '80s output of Pet Shop Boys than the vintage theatrics of ELO and Sparks. The elaborate multi-layered harmonies, air-punching choruses, and lead singer Irwin Sparkes' infectious enthusiasm are still as prominent as ever, but this time round, they're complemented by a more imaginative glossier production from the likes of Max Dingel (White Lies), Jay Reynolds (Just Jack), and former Jamiroquai keyboardist Toby Smith. Lead single "Choices" is a perfect example, a hook-laden pure pop song full of Calvin Harris-style spacy synths, swooping vocals, and fast-paced panpipes, offering more inventiveness in its three-minute running time than the entirety of their debut. The call-and-response chorus of "Bumpy Ride," the glam-inspired "Giddy Up," and the arcade game intro and self-deprecating lyrics of "Unlikely Hero" are just as convincing attempts at Hi-NRG stadium-sized pop, which makes the album's occasional shift into more introspective downbeat territory even more surprising. The skittering percussion, glockenspiel backing, and abstract electronica of "Devil's in the Detail" could have been lifted from Radiohead's OK Computer, the techno beats and angular guitars of "Sarajevo" echo the indie dance of Bloc Party, and the haunting choral chants and sparse acoustic instrumentation of "Little Brutes" is a strange way of closing an album that began with such pure pop vigor. But ignoring the apparent crisis of confidence that appears toward its finale, The Illusion of Safety is a well-constructed attempt at electro, bursting with potential singles, that goes some way in compensating for the derivative clichés of their debut. ~ Jon O'Brien, Rovi