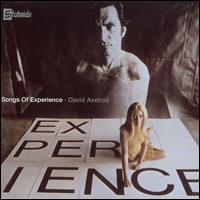 After the modicum of success he'd experienced with his debut, Song of Innocence, set to William Blake's epic suite of poems, composer, arranger, and producer David Axelrod turned to the British poet's Songs of Experience for inspiration in creating his follow-up album. Using eight of Blake's poems, Axelrod composed a suite that was less rock in its aim and more pop- and jazz-oriented in places, but overall a more orchestral work. Texturizing a symphony with percussive elements and the use of British and Irish folk song, as well as the stylistic inventions of fellow arranger Gerald Wilson for effect, Axelrod created a sobering, and, in places, even melancholy collage of song and lyrical styles that slid rather than drove home its point: that experience is a good but bittersweet teacher. Axelrod's compositions are positively literary here, lush and varied, using as much space as they do sound for dramatic and dynamic effect. His complex use of the various colors the horn section was capable of producing allowed him to create new palettes for the rock instrumentation. The centerpiece of the album is "The Human Abstract," a gently swinging, funky, bass-driven work that juxtaposes a strummed electric guitar playing augmented sevenths against an acoustic piano and a muted drone of horns. By the time the guitar enters for its solo, the strings have erected a space out of the ether for themselves to further shore up the orchestra's time-honored body against the wail of unrepentant youth. The tension in the tune is dramatic, colorful, and hued with as much red and yellow as there is blue and black. When the French horns and tuba state their case against the high-flying impetuousness of the restless spirit, a piano bridges the gap, whispering the melody's main theme in the center channel, whispering them both out into silence. Other notables are the positively majestic "The Divine Image," and the pastoral sadness in "A Little Girl Lost." Axelrod's meditations were getting darker with the times in 1969, but they hadn't yet reached the horrific potential for darkness that they would on 1971's Earth Rot. In 1969, Axelrod was still a musical contemplative searching for a sound that best exemplified not only his feelings but also the heady text he sought to sonically illustrate. He succeeded in spades. ~ Thom Jurek, Rovi