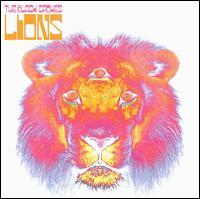 If the Black Crowes are anything, they are survivors (and, reportedly, if Chris Robinson had his way, he'd be a genuine survivor, appearing on CBS' genius television show with his wife Kate Hudson), weathering years of popularity and disdain, before emerging at the end of the '90s as a rarity -- a real, road-weathered rock & roll band, in the classic sense. And it wasn't just that they played classic rock -- they stayed out on the road constantly, bashing out albums when they weren't fighting record labels. By the dawn of the new millennium, there weren't many bands like that out on the market, and it was a mixed blessing -- it meant that they had an ugly breakup with their longtime label, American, but it also meant that there really wasn't anybody else for Jimmy Page to turn to when he wanted to tour in 1999. These two events inform Lions, their first album for V2 records, and their most idiosyncratic album since 1994's neglected gem, Amorica. Like that album, this record is instantly familiar, recalling many common and forgotten platters from the early '70s, yet twisted through a surprisingly individual voice from the Crowes. And, like that record, this is more about the music and the texture than the songs, which is disconcerting for anybody looking for the knockout songwriting of their first two records, or even "Stop Kicking My Heart Around." And, coming on the heels of that record, which was as tight a rock & roll album as they ever did, the diffuseness of Lions seems a bit off-kilter. Still, there's no denying that the group is stretching out and sounds terrific, and not just because Don Was is behind the boards. The group is supple, laying into jams without seeming indulgent, and rocking like a bastard when the occasion calls for it. It's just too bad that there aren't many songs to remember here. Some could argue that was the case with Amorica as well, but those never felt like excuses to play music, and the tone shifted dramatically from track to track. Here, the songs can seem incomplete, as if they got the sound of the track down, but not the structure. Still, this is a powerful, textured hard rock record that covers a lot of ground, surging from powerful riffs to gospel choruses and funkier-than-expected riffs. There are few bands of their time that could sound so versatile within the confines of hard rock, and if this doesn't really deliver memorable songs, tracks do jell on repeated plays, and the Black Crowes' kaleidoscopic vision of rock's history is reason enough to listen to this record -- even if you're left with a nagging suspicion that this could have been a knockout with some real songs in tow. ~ Stephen Thomas Erlewine, Rovi