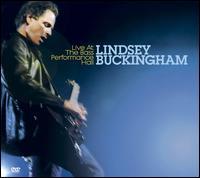 Live at the Bass Performance Hall

This double-disc package by Lindsey Buckingham, guitarist, songwriter, producer, and principal musical architect of Fleetwood Mac's multi-platinum-selling sound, contains a live DVD of concert performances with a bonus documentary, plus a CD that includes all but one of the performances on the DVD. The material ranges from tunes on his last solo album, the brilliant Under the Skin, as well as Fleetwood Mac nuggets, and a choice track or two from his other solo offerings. His band features second guitarist Neale Heywood, drummer Takuya "Taku" Hirano, and bassist/keyboardist Brett Tuggle. Lindsay Vannoy plays additional keyboards on some cuts. Things begin quietly enough with "Not to Late," the opener from Under the Skin, followed by "Trouble" from 1981's Law and Order. These are stark and deeply emotive performances. They are not accompanied, but Buckingham's custom designed electro-acoustic guitar is front and center with that stunning voice of his. "Never Going Back Again," from the Mac's Rumours follows this and it too is played solo. This is a deeply personal and moving performance of this song. Things remain in familiar territory with a full band performance of "Second Hand News," but it needs to be stated that without those trademark Stevie Nicks and Christine McVie backing vocals, it's a bit stark and half-baked. When Buckingham goes back to playing his solo material, the passion returns in spades. "Cast Away Dreams" drifts in to the heart of the listener and hangs there, revealing the brokenness in its lyric. This follows in the sprightly, rhythmic "It Was You." The way the back and forth vocals work, staggered slightly and tightly arranged, is as sophisticated as pop/rock gets. Mac fans get fine readings of "Big Love," and "Go Your Own Way," (and on the DVD they get "Tusk" as well). But what Buckingham is trying to show on this excellent set is that he's an artisan in his own right and always has been. His solo written material is as fine as anything he wrote for the band. In fact, one becomes aware of just how deep and wide his talents as a writer, performer, and arranger go on his own. If anything, Live at the Bass Performance Hall is a stellar introduction to a man who has been in our midst for more than three decades, and has been all but ignored as an artist in his own right. This excellent set will hopefully go some way toward righting that wrong. ~ Thom Jurek, Rovi