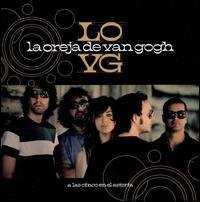 La Oreja de Van Gogh's fifth album, A las Cinco en el Astoria, marks a new phase in the Spanish pop/rock band's career with the introduction of a new lead vocalist, Leire Martínez, who takes the place of Amaia Montero after a decade of multi-platinum, chart-topping, international success. Montero left the band in 2007, a year-and-a-half after the release of Guapa (2006), the latest in a line of excellent albums by the band. Reportedly there were bad relations between Montero and guitarist Pablo Benegas, the band's primary lyricist, and indeed a palpable tension between the two could be heard on Guapa. For instance, "Muñeca de Trapo," the album's biggest hit, was driven by a surging guitar riff that nearly overtakes the multi-tracked vocals of Montero on the chorus -- as if the guitarist and vocalist were fighting over who gets to shine in the spotlight. In contrast, there are only a few propulsive rockers on A las Cinco en el Astoria ("El Último Vals," "Más," "Sola" -- all great songs), a scaled-back album that returns La Oreja de Van Gogh to their roots, back when they were a calmer, simpler band. There's no getting past it; in so many ways the addition of Martínez in the place of Montero changes the band. Unlike Montero, who was an iconic, experienced frontwoman with a strong personality -- and a favorite of many fans, no doubt -- Martínez is at this early point a pretty face without a clear-cut persona. Though, prior to her performance here, all most people know about the young woman is that she was the sixth-place runner-up on the 2007 season of the reality show Factor X, it's evident Martínez is a gifted singer with a strong voice who brings a contemporary sense of style to the band. She may not contribute any songwriting -- unlike Montero, who was an integral part of the band's songwriting and is even credited as a co-writer here on "Europa VII" -- but Martínez invigorates the band with her freshness and youth. As for the other bandmembers, Xabi San Martín and Pablo Benegas, the two remaining songwriters in the absence of Montero, tailor-made a bunch of great songs for Martínez to sing; in addition to the aforementioned highlights, standouts include "Inmortal," "Jueves" (a piano ballad clearly intended as a showcase for Martínez), and "La Primera Versión." ~ Jason Birchmeier, Rovi