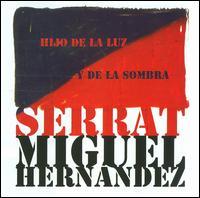 In 1972, at the peak of his talents, a young Joan Manuel Serrat released Miguel Hernández, a milestone album setting music to the words of one of the greatest Spanish poets. Thirty-eight years later, on the occasion of the 100th anniversary of Hernández's birth, Serrat revisits for the first time Hernández's work on Hijo de la Luz y de la Sombra. In what is a clear case of damned if you do, and damned if you don't, it would be grossly unfair to compare both albums, but at the same time, it is impossible not to do it. Unfair because both the ailing Serrat (who received treatment for cancer twice in the 2000s) has long ceased to be the phenomenal force of nature that turned the Spanish-speaking world upside down between 1965 and 1974, an influence comparable only to what Georges Brassens did for the French language, Fabrizio de André for Italian, or Bob Dylan for English. Furthermore, even Hernández's reputation has undergone a radical change, from a banned and thus almost forgotten poet during the Franco regime (1936-1975; Franco was also responsible for the poet's imprisonment and death in 1942, at age 31) to one of the key figures of 20th century Spanish literature. Serrat's 1972 album -- Franco was still alive and in power -- was a defiant, revolutionary gesture; his 2010 CD is simply a longing, tender tribute. It is, however, impossible not to compare both albums, not only because their source and the artist are the same, but also because their differences may be more illuminating than their similarities. Rather than being Miguel Hernández, Pt. 2, Hijo de la Luz y de la Sombra seems to consider Hernández's work from another perspective. If the ultimate result of the 1972 album was to greatly contribute to the construction of Miguel Hernández as a symbol of political resistance, the 2010 CD begs the listener to pay attention to his poetry, instead. The 1972 album was as black as its cover, its uniformity of tone sending shivers down the spine, one harrowing tale of suffering, anger, and despair after another, all set to austere, elegiac arrangements. By contrast, the 2010 album chooses instead to look at Hernández's entire oeuvre, from his juvenile romantic works to his somber late poems, infusing this collection with greater variety of mood and themes. The arrangements by Joan Albert Amargós -- which, incidentally, do not hold a candle to Francesc Burrull's superb 1972 orchestration -- are surprisingly friskier and lighter, even for the darker texts such as "El Hambre" -- the comparison with the similarly themed "Nanas de la Cebolla" from the 1972 album is striking, to say the least. Particularly, the use of background vocals, such as those on "Del Ay Al Ay por el Ay" or "Dale Que Dale" would have been utterly out of place in the first collection. In short, Hijo de la Luz y de la Sombra is not, and could never have been, really, much of a match for Miguel Hernández. That, however, does not make it a bad album. Far from it; it is one of Serrat's strongest late releases. Serrat's singing may have lost his youthful fierceness, but he can be genuinely moving, particularly when dealing with texts that obviously mean so much to him, such as the title track (and obvious project centerpiece) that closes the album. Needless to say, Hernández's mesmerizing words are the sole reason this record exists, and provide a true feast for lovers of the Spanish language. An inessential, yet eminently dignified addition to Joan Manuel Serrat's exemplary oeuvre. ~ Mariano Prunes, Rovi