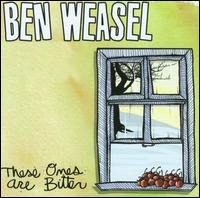 These Ones Are Bitter

Woe betide Ben Weasel fans without high-speed internet and an iPod, for These Ones Are Bitter, Weasel's sophomore solo set, is available only as a download. Bitter indeed for those without the wherewithal to get it, and yet another kick in the teeth to the eternally optimistic still holding out hope that the singer might just re-form Screeching Weasel. But really, what's the point in bitching? Just suck it up and celebrate Weasel's latest release, because it's a stunner. The exuberant pop-punk opener "Let Freedom Ring" kicks off the proceedings in fine style, and rings in the changes as well. Now supported by Alkaline Trio bassist Daniel Andriano and All American Rejects' drummer Chris Gaylor and guitarist Mike Kennerty, the song's are undeniably Weasel-y, but presented in quite a different style. The rhythm section certainly fuels the songs, but it's the guitars that now define the sound, with Kennerty's leads licking out of nearly every bar within, with "Got My Number" just one obvious example. The lead guitarist also takes on production duties, creating a sound that's brighter, sunnier, glossier, and fuller than anything Weasel's ever attempted before. Even so, there are still echoes of the past within, not least with "The First Day of Spring," yet another in the singer's long running seasonal series. And there are still nods to the Ramones, notably on the ebullient "Happy Saturday" and the bittersweet "Blue Is the Ocean." There are surprises, too, like the Cheap Trick-y "Addiction by Subtraction," and best of all, the almost epic "In a Bad Place." That latter number rips a page right out of the U2 songbook, opening with a chugging rhythm and yearning organ melody on top which slowly builds and finally kicks out into the stratosphere in a deluge of rousing rhythm, swelling organ, and Kennerty's simple but effective guitar solo. But virtually all the songs here are rousing, or at the very least anthemic, exuberant, and/or fast and sweet. Simultaneously, Weasel's moved into poppier territory, with hooks so big they could land a whale. And a whale of a time is what fans are sure to have, with Weasel slamming home some of his best songwriting since, well, Screeching Weasel days, and at times, effortlessly topping that. He's in grand form, the rest of the band sharp as tacks, and for all the bitterness this album will entail, these songs are destined to become much loved classics. ~ Jo-Ann Greene, Rovi