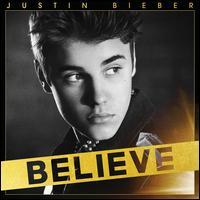 If you subtract the remixes, acoustic versions, live takes, and holiday material that filled Justin Bieber's releases from 2009-2011, Believe falls only a few tracks shy of doubling the singer's quantity of original songs. That fact alone will satisfy a large portion of his fans. More notably, Believe finds Bieber co-writing all but one song and handling his "not a boy, not quite a man" status with poise, despite some considerable contrast between his age and what he has been through. He's at a point in his life where he would fully deserve a pass for taking himself too seriously, but there's "Boyfriend" -- a G-rated "Wait (The Whisper Song)" with a My World-like chorus -- in which he compares himself to Buzz Lightyear. He has endured puberty, including a voice change, all the while undergoing intense public scrutiny that has included fallout from a paternity accusation. He addresses the paternity issue head-on in "Maria," a real-life, modern-day rewrite of Michael Jackson's "Billie Jean": "That ain't my baby/That ain't my girl." (The song is not on the shorter 13-track edition, but it's the most significant song in Bieber's catalog thus far.) Given the space allowed by an hour-long release, Bieber aims for just about every pop market. Believe incorporates appearances from Drake, Nicki Minaj, and Big Sean, while Ludacris is back for the first time. A song featuring slabs of dubstep bass is followed by an acoustic ballad. The throwback "Die in Your Arms" heavily references young MJ, harpsichord and all, and is driven by a well-known breakbeat. The title song involves a gospel choir, while the sound of an acoustic guitar is almost as common as a dance beat. Lyrically, Bieber seems to be in no rush to enter Chris Brown territory. He stays PG, flattering and flirting or stating devotion throughout the majority of the songs; "Loving you is so damn easy" might be the line most likely to raise an eyebrow, while several others, like "Everyone's itching for beauty, but you're scratchin' the surface," have a goofy/awkward teenage charm to them. Believe has enough strong material to keep most of the followers satisfied for another year, while elders should feel relieved that nothing is as sickly sweet as "Baby." ~ Andy Kellman, Rovi