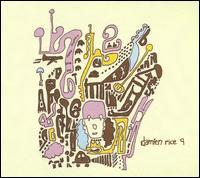 In 2003, Irish singer/songwriter Damien Rice wooed listeners with his debut, O, a collection of songs that displayed his (and counterpart Lisa Hannigan's) poignant yet interesting and intelligent vocals over quiet guitars and strings. On O, Rice was able to come off as sensitive and emotional without seeming sappy or cheesy, a difficult balance to attain, and certainly an impressive accomplishment. He was also able to write simple, pretty songs that still managed to have a voice and style of their own, and stick out from the rest of the acoustic guitar folk-pop. Needless to say, because of all this, he definitely put some pressure on himself for what he would present on his next release. What he turned out, 9, unfortunately shows signs of a sophomore slump. There are still some great tracks on it -- the stellar "The Animals Were Gone," the Dylan-esque "Coconut Skins" -- and to give him credit, Rice ventures into other genres, using a piano more frequently and even an electric guitar once or twice ("Me, My Yoke & I" is a rock song, no two ways about it) along with his usual timid acoustic accompanied by orchestral strings, but where before he was able to write love songs that didn't come across as clichéd or affected, on 9 (which, incidentally, has ten tracks) he seems so aware of the danger of coming off as trite that he tries too hard to overcome it, and ends up with something that seems very forced. For the most part his melodies -- excluding the aforementioned pieces -- are nothing more than unmemorably nice, but when coupled with hooks like "The girl who does yoga/When we come over" (from "Dogs") and "Does he drive you wild?/Or just mildly free?" (from "Accidental Babies") they become memorably painful, which takes away from what's actually great about 9: namely, the musical arrangements and Rice's voice (Hannigan, though she begins and ends the album, is hardly present), whose emotion ranges from dejected apathy to anger and is always pretty believable. 9 is by no means a failure, or even bad, but it dulls in comparison to what Rice can really produce, which makes it disappointing overall. ~ Marisa Brown, Rovi