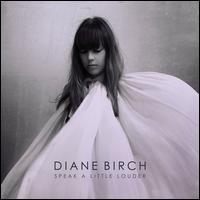 Speak a Little Louder, Diane Birch's follow-up to her audacious debut Bible Belt in 2009, features heavyweight talent in the production department. Steve Greenberg is back, but it's Homer Steinweiss helming most of the session, with contributions from E.G. White, ?uestlove, and Matt Hales. Its 11 songs, recorded at seven different studios, are much more polished; her piano and keyboards are adorned by big, natural-sounding drums, humming basslines, and enough guitar to build a stable, dynamic foundation for her voice in a warm, amniotic mix. Birch is an unapologetic pop classicist. The influences of Elton John's melodic sensibility and Stevie Nicks' voice -- in both timbre and phrasing -- are ever-present. The long shadow of '70s radio pop on Speak a Little Louder is a statement of defiance rather than one of nostalgia. On the title track/opener, drums are mixed in tandem with the lead vocal. Her hook is tight and alluring in its nod to John circa Tumbleweed Connection. Its fat, minimal bassline, pianos, and synths around her multi-layered backing vocals (all Birch) provide real drama. The enormous rolling tom-toms on "Lighthouse" recall Kate Bush's "Running Up That Hill," though the twist in the melody is less strident, more subtle; the arrangement for the mellifluous backing chorus is stellar. "Pretty in Pain" is one of the many places where this team uses Lindsey Buckingham's production aesthetic to get maximum emotional effect. It frames a midtempo, souled-out rocker that recalls Carole King on Thoroughbred. "Love and War" contains funky rhythms and a string orchestration that suggests Betty Wright. "Frozen Over" combines a soulful hook with an anthemic backing chorus -- that and a wonderfully complex bridge worthy of Laura Nyro. Set-closer "It Plays On" is the album's most emotionally resonant cut. Its subjects are loss, grief, and acceptance. Birch's piano is its dominant instrument, and it combines with Nicks' sense of balladry and a transcendent, gospel-styled backing chorus.Though the singer is at her most vulnerable, there remains a steely determination in the grain of her voice that is buoyed by the choir. This album isn't perfect. Birch's weakness remains her lyrics -- though in fairness, they too have matured since Bible Belt. They continue to sacrifice emotional depth in favor of rhyme in various places. On Speak a Little Louder, Birch does, showcasing her developing talent in (mostly) fine songs that place her in a lineage where sophisticated melodies, nuanced production, and skilled arrangements make for memorable music. ~ Thom Jurek, Rovi