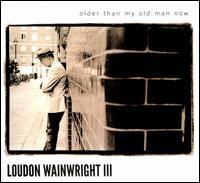 Older Than My Old Man Now

Loudon Wainwright III's Older Than My Old Man Now deals primarily with the inevitable: mortality, but not without his trademarked brand of cranky, wiseacre (and sometime just plain mean-spirited) sense of humor. Wainwright spends most of his time here "writing about my favorite protagonist: me." That said, this is actually as much an album about the ties that bind permanently (family) as it is about approaching death. On "The Here & Now," the opening track, Wainwright enlists all four of his children, ex-wife Suzzy Roche, and current wife Ritamarie Kelly. Guitarist John Scofield helps makes this the jazziest thing he's ever written -- and it's easily the best track here. He uses spoken word recordings by his late father (a well-known LIFE Magazine columnist), which makes this the ultimate Wainwright family album. "In C," a duet with cellist Erik Friedlander and his own piano and vocals, is a rather poignant meditation on family, complete with dissolution, divorce, and disaster. Wainwright's answer? "And if families didn't break apart/I suppose there'd be no need for art." But it sounds disingenuous -- Wainwright treasures his family, no matter what shape it's in, because it haunts him; it's ultimately unbreakable despite his best efforts -- this is underscored by "All in a Family," recorded with daughter Lucy and accordionist Rob Morseberger. He competes with his dad on the title track, which is introduced by a beautiful spoken word piece by the columnist about his own father. His dad's voice and poignant prose also introduce "The Days That We Die," on which son Rufus appears. The song reflects the complex relationship between Loudon and his dad, and also the publicly acknowledged tense one between him and Rufus -- as if to underscore those differences, they alternate verses. The beautiful "Over the Hill" is the only collaborative writing effort with Wainwright's late ex-wife, Kate McGarrigle; it is sung with their daughter Martha. "Something's Out to Get Me," with its violins and baritone saxophone, is a fine melancholy blues to send it all off. Not everything works here, however. "I Remember Sex" with Barry Humphries (Dame Edna Everage), and "My Meds" are just plain bad; "Double Lifetime" with Ramblin' Jack Elliot reveals Wainwright's humor stretched to the metaphorical breaking point, and "Date Line" feels more like it was just forced into the mix because he liked it, not because it works. Older Than My Old Man Now contains some excellent work when Wainwright's not putting on false bravado or bullshitting, but ultimately, this is for his hardcore fans rather than casual ones. ~ Thom Jurek, Rovi