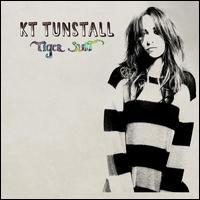 Drastic Fantastic -- the spangly attempt at pop stardom consolidation -- didn’t catch on like it should have, but KT Tunstall doesn’t quite beat a retreat on its 2010 sequel, Tiger Suit. Sure, she’s reverted to contemplative photographs for her album art, but Tiger Suit isn’t a hermetically sealed sensitive singer/songwriter record, all quivering sincerity and strummed guitars. Fittingly for an album recorded at Berlin’s Hansa studio, where Achtung Baby and Heroes were cut, it is produced, polished, and textured, an album with movement and progression. Once the ominous opening chords to “Uummannaq Song” drift away, the song settles into a tight art-funk groove accentuated with folk shout-alongs, following no straight path to its conclusion. Tunstall takes no direct routes on Tiger Suit -- not when she slows tempos down, not when she recycles the “Black Horse and the Cherry Tree” rhythm for “Come on, Get In” -- but the twists that take her into the fuzzy glam-stomp of “Madame Trudeaux,” the whistled hook of “Glamour Puss,” the tight swirling circles of “Difficulty,” or the languid European blues of “Golden Frames” aren’t self-conscious stylizations, they’re lively and unexpected, colorful enough to grab upon first listen and rich enough to reveal layers upon repeats. As sonically pleasing as it is, Tiger Suit isn’t a mere vehicle for sound; it’s built upon Tunstall’s strongest set of songs yet, and it’s no coincidence that they’re her most ambitious, either: she may be firmly within the mainstream but she’s taking risks as a composer and record-maker, never settling into the role of the earnest earthbound folkie, winding up with an excellent album that satisfies as pure sound and as songwriting sustenance. ~ Stephen Thomas Erlewine, Rovi