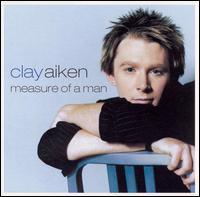 Measure of a Man

Justin Guarini, the runner-up on the first American Idol, released his album ten months after the competition ended and two months after Kelly Clarkson, the winner of the competition, released her debut. Clay Aiken, the runner-up on the second American Idol, released his first album, Measure of a Man, a mere five months after the close of competition and two and a half months before the winner, Ruben Studdard, released his record. Clearly, Clay was something more than a singer that came in second -- he was a bit of a pop phenomenon, capturing the hearts and minds of American Idol's core audience of preteens and housewives. To those not part of either demographic -- including those who faithfully watched AMIdol -- his appeal is a little puzzling, since he's hardly the cutest teen idol, looking a bit like Thom Yorke as a Southern-fried theater nerd, and his voice his better-suited for show tunes and his musical taste is thoroughly middle-of-the-road. Whenever he tried to tackle dancier material he seemed like he was singing a foreign language, and he never seemed at ease wearing or doing anything remotely hip; at least Kelly and Justin seemed somewhat comfortable doing teen-oriented material. Clive Davis, smart man that he is, decided to play up Clay's MOR bent on Measure of Man, never pushing Aiken toward club-ready dance cuts like "Miss Independent," or trying to approximate the sound of the Matrix or Neptunes on any cut. Instead, this is firmly pitched at adult contemporary radio, thanks to the cleanly professional production and the selection of self-consciously mature songs, written by such industry stalwarts as Desmond Child and Cathy Dennis (early-'80s metalhead Aldo Nova, of all people, gets in on the action, too, with "This Is the Night," the single that preceded Measure of a Man; it's included here, inexplicably called a "bonus cut," even though it's inserted at track nine of a 12-song album and there's been no version of the album without the song). Clay's earnest delivery -- somewhat sweet and expertly coached -- gives these songs a bit of innocence and believability, but the slickness of the whole enterprise overshadows his voice, particularly because his voice isn't all that remarkable on record. Perhaps it's due to the rushed release schedule of the album (to everyone's credit, it doesn't sound rushed), leading to Aiken overworking his voice, but his voice doesn't dazzle the way it occasionally could on the show; isolated from the visuals and his competitors, his voice sounds diminished. Even so, it's perfectly suited for this safe MOR album, and while none of the songs really catch hold, it doesn't matter since the sound of the record is pleasant and perfect for radio, which will please both the preteens and housewives, which is all Measure of a Man needed to do, anyway. ~ Stephen Thomas Erlewine, Rovi