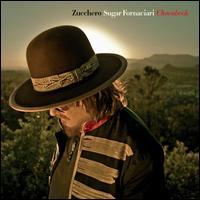 Zucchero's absurdly successful career has been built around the combination of all-too-Italian histrionics and his passion for African-American music. As many extroverted entertainers before him, as the decades went by there was always the inherent risk of his one day turning into a parody of his own persona. Signs of a newfound maturity were already visible in his last studio offering, 2006's Fly, but in 2010's Chocabeck he fully reaches an understated grandeur. A concept album of sorts, loosely describing one day from dawn to dusk in a small Italian town not unlike the ones of the singer's childhood, this beautiful, autumnal cycle of songs works quite differently from Zucchero's standard proposition of a few instant hits and a lot of raunchy filler. The first three songs, for instance, constitute almost a mini-suite of quiet, hymn-like ballads that set the mood for most of the album. It certainly helps that the opener, "Un Soffio Caldo," has lyrics by the great Francesco Guccini, or that is immediately followed by the album's centerpiece "Il Suono Della Domenica," with lyrics by Bono translated into Italian, while the third one, "Soldati Nella Mia Città," is reminiscent of Francesco de Gregori. It is only when the day reaches noon that loud guitars and soul background vocals come back to announce a double dose of old-school Zucchero, with the first single, "E un Peccato Morir," and the compulsory double entendre joke "Vedo Nero." The remainder of the album is split between more atmospheric ballads and midtempo numbers, but the reigning sensation is one of melancholy, not in the least because the last three tracks progressively slow things down, drawing closed a perfect circle. As is customary with Zucchero's productions, the list of collaborators is both impressive and key to the album's success. Co-writers, for instance, include Pacifico and Roland Orzabal, the aforementioned Bono and Guccini, and Zucchero regulars such as composer Mimmo Cavallo and lyricist Pasquale Panella. Brian Wilson sings multiple harmonies on the title track, and Don Was and Brendan O'Brien produce. For all of their input, what is most remarkable about Chocabeck is its stylistic and thematic consistency and, of course, Zucchero's emotive singing. Surprisingly for an artist so long associated with raucous fun, this is a work that often achieves a certain stately elegance. Far from a spent creative force, Zucchero looks like an artist capable of reinventing himself in a poignant and dignified manner. Buyers beware: as has typically been the case since Zucchero achieved international stardom, the Italian, European, and American versions of Chocabeck will differ. Instead of "Il Suono Della Domenica," the European version includes the original Bono English lyrics for the same song, titled "Someone Else's Tears." The American version will be sung entirely in English, with two songs featuring new lyrics penned by Iggy Pop, "Too Late" and "Spirit Together" ("Alla Fine" and "Chocabeck" in the Italian CD). This review concerns the Italian edition. ~ Mariano Prunes, Rovi