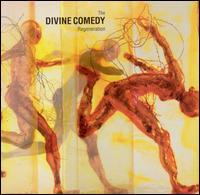 Just when you start to take a "Yeah, OK, old news, whatever" attitude about Neil Hannon, he hits you with his most accomplished work yet, reminding you of the impressive, inexhaustible depth of his abilities as a singer, writer, and arranger. With a huge assist from fantastically warm, sensual production by Radiohead's engineer, Nigel Godrich, Regeneration is the most ambitious baroque-pop LP Hannon's attempted outside of 1997's A Short Album About Love. And while that one-off was nearly, almost wonderfully overwhelmed by the orchestra he hired for the two London Shepherd's Bush Empire evenings it came from, here those same elements are ever-present but take a supporting role instead of the lead. What's emphasized instead are the things Hannon does so damn well: intelligently-constructed, highly evolved and involved pop with excellent lyrics, led by his deft piano touches and moody bass and guitar -- the music that best frames his unabashed crooning. Actually, on most of this LP he's a little bit more restrained than normal, cooing more than the man who wailed so melodramatically on the cultured old standbys that made his name (like "The Frog Princess"). Occasionally he still cuts loose, such as the sudden, belted swell on "Perfect Lovesong." But most of the time, he lets the spellbinding soundtrack and the beguiling radiance set up his more reasoned, strong vocal takes. Meanwhile, Godrich flushes absolutely all the absorbing elegance, splendor, and color out of such luxurious, twinkling, candle-lit enchantresses as the LP standout, "Note to Self," and the "Exit Music (For a Film)" and "No Surprises" (Godrich again) flavor of "Lost Property." And how about those crystal, hummable melodies that abound, like the stupendous soaring chorus of "Eye of the Needle" and the U.K. single, "Love What You Do?" Each song gives you something resplendent, refined, memorable and, most of all, opulent and lovely. This is bound to turn some jaded heads. ~ Jack Rabid, Rovi