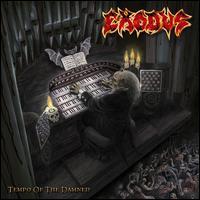 Tempo of the Damned

Given up for dead over a decade earlier, the mighty Exodus -- the original kings of thrash metal -- made an unexpected but long-rumored return in 2004 with the release of their sixth studio album, Tempo of the Damned. But what had been intended as a long-awaited reunion of their seminal Bonded by Blood lineup was tragically thwarted with the sudden death of vocalist Paul Baloff in early 2002. Fittingly, Baloff was duly supplanted by none other than Steve "Zetro" Souza, the man who'd replaced him in the first place and who had gone on to sing on every Exodus album thereafter, including their mid-period thrash classic Fabulous Disaster. Of course the fact that Souza was clearly the better and more reliable vocalist (albeit not as fun a character as Baloff) should not be overlooked, and with the welcome involvement of long-gone founding drummer Tom Hunting, Tempo of the Damned still serves as quite the family reunion. It also doesn't disappoint musically, picking up the pieces right where the band's star-crossed career had fallen apart 11 years earlier with the underrated Force of Habit, and turning in a performance that is, at once, vintage Exodus and mindful of modern recording standards as well. All of the old, much loved Exodus hallmarks are here: lyrics filled with biting, sarcastic social commentary; no-fuss, jagged thrash metal; and unparalleled technical precision.

As has always been the case, it's the dazzling six-string tag team of Rick Hunolt and Gary Holt (quite simply the tightest rhythm guitar duo in the history of thrash -- Slayer included) that truly drives the Exodus bullet train over lightning runs like "Scar Spangled Banner" and the wonderfully retro-named "Impaler." Their solos are as musical as the riffing is not, and, as heard on excellent examples like "Shroud of Urine" and "Forward March," always typified by inventiveness without excess pyrotechnics. About the only deviation from the band's tried and true formula of old comes in the shape of Souza's more varied vocal styles, including a less whiny, wholly uncharacteristic full-throated death roar for the standout "War Is My Shepherd." Tempo of the Damned's second half isn't quite as memorable, the likes of "Sealed with a Fist" and "Throwing Down" suffering from the same sort of aimless riffage that had mired disappointing earlier efforts like Pleasures of the Flesh and Impact Is Imminent, but "Culling the Herd" manages to buck this trend with plenty of fireworks, and the title track still moshes with a vengeance. Taken as a whole, Tempo of the Damned successfully resurrects Exodus as the potent and formidable thrash machine of old. The fact that they are well aware of their strengths, and content to stick with them to the end, is what makes this such a welcome release for the band's loyal followers, as well as younger fans looking to understand what got heavy metal where it is today. ~ Eduardo Rivadavia, Rovi