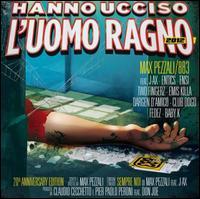 Released in 1992, Hanno Ucciso L'Uomo Ragno, the debut album from 883, took Italy by surprise first by becoming a smash hit, thanks to its title track novelty single, and even more unexpectedly, by turning out to encapsulate a seminal moment in contemporary Italian pop music. Max Pezzali and Mauro Repetto's derivative, paper-thin, yet catchy Euro-techno concoctions weren't much to write home about, but their lyrics were a different story. Written in a colloquial language and mixing silly teenage antics with unsuspectingly keen observations about boys growing up in provincial Italy in the 1980s, 883's tales of suburbia struck a nerve with an entire generation. Never mind that their debut album finds them at their most adolescent (upon release, the record was universally denigrated by critics, who saw the band as a commercial gimmick designed by producer Claudio Cecchetto), and that only subsequent releases revealed the true depth of Pezzali's talents. In fact, arguably the only glimmer of future achievements was the pitch-perfect narrative of "Con un Deca," about two friends trying to make something out of a night in a sleepy small town with only 10.000 lire in their pockets. The rest of this short album of only eight songs comprised a humorous rant about parents sick and tired of their sons' irresponsible behavior, and a series of tirades against snobby young people who worry only about appearances and money. And of course, the improbable summer hit "Hanno Ucciso L'uomo Ragno," a fantasy tale about the murder of Spiderman that bears no thematic relation to the rest of the album, other than the duo's infatuation with American pop culture.

By 2012, when deluxe reissues were becoming mandatory, Pezzali decided to do something a little different for the record's 20th anniversary. Since 883 turned out to be a huge influence on the then nascent Italian hip-hop scene -- as most future Italian rappers were disaffected teenagers when the band was at its peak -- Pezzali invited several MCs to remake the original album, which was an interesting idea in theory. Unfortunately, this proved rather trite in execution. Hanno Ucciso L'Uomo Ragno 2012 consists of the album's original versions with a rap commentary thrown in, usually during the instrumental breaks. The same procedure applies to every track: there are no new vocals, instrumentation, mixes, or any rethinking of the original material. In short, either the experiment should have been more radical, or the record should have been left as it was. The fact that seemingly every Italian MC present here (Entics, Ensi, Two Fingerz, Emis Killa, Dargen d'Amico, Club Dogo, Fedez, and Baby K) strives to achieve the same type of extremely codified delivery -- which could be described as a sleepy voice with a rarefied non-Italian accent that talks about how cool and tough they are, does not help matters either. In this sense, it is a pity that some of the most unique Italian hip-hop artists are not involved in these remakes: Jovanotti is perhaps too mainstream now for this crowd, the eccentric Caparezza is absent, the controversial Fabri Fibra is only present in one of the "happy anniversary" answering machine messages that are sprinkled throughout the album (in which he confesses he hated 883 as a kid), and J-Ax is Pezzali's special guest for the only new track, "Sempre Noi." The album's opening track, while not bad at all, is thematically and musically identical to many other Pezzali songs. Its video, however, may bring joy to nostalgic 883 fans as it features a rare public appearance by Mauro Repetto, in his first appearance with Pezzali since 1994. But that is exactly the audience this reissue has in mind -- and even they may not be convinced by the rap. Everybody else wanting to find out what was really so special about 883 and Pezzali is strongly encouraged to pick up the excellent two-disc compilation Tutto Max (2005) instead. ~ Mariano Prunes, Rovi