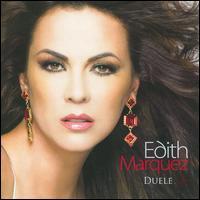 Edith Márquez's eighth full-length effort, Duele, finds her collaborating with Latin pop hitmaker Armando Ávila on an album's worth of material that is mostly original. This is a change in direction from previous albums, which were comprised primarily of cover material and less pop-oriented. Known for his work with La Quinta Estación, Gloria Trevi, and RBD, Ávila is an unlikely producer for la Reina de las Baladas. After all, Márquez's previous album, Pasiones de Cabaret (2008), was a collection of ballads and boleros performed in cabaret fashion. In sharp contrast to her previous album, Márquez performs material written by some of Ávila's Latin pop associates, most notably Natalia Jiménez of la Quinta Estación (who is credited with co-writing the song "Ardiente Pasión") and Trevi (who is credited with writing "Ojos de Fuego"). In addition to producing the album and getting original material from his associates, Ávila is credited with co-writing four of the album's 12 songs, including the stand-out lead single, "Me Voy." Fairly typical of the album, "Me Voy" is a pop/rock song driven by guitar and drums that is bolstered by strings on its chorus. There's even a brief guitar solo. Another guitar-driven highlight is "Que Corra el Aire," which is written by Spanish singer/songwriter Aitor. While the light guitar riffs that propel much of Duele are uncharacteristic of Márquez, the string arrangements aren't, and they're all over the album. So Duele isn't a total departure for Márquez. Sure, it rocks harder than any of her recent albums and it's comprised primarily of original material penned by Latin pop hitmakers, but most of the songs fall into the power ballad category and there are lots of soaring string arrangements. The change in direction for Márquez on Duele is refreshing and is in some ways a return to her early work. In fact, the aforementioned lead single, "Me Voy," was written by Ávila in collaboration with Bruno Danzza, who had written Márquez's signature song, the chart-topping breakout hit "Mi Error, Mi Fantasía," back in 1998. ~ Jason Birchmeier, Rovi