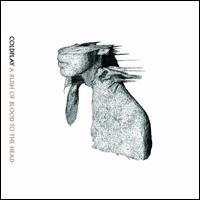 A Rush of Blood to the Head

After touring in support of their debut album, Parachutes, Coldplay was personally and professionally exhausted. Frontman Chris Martin insisted he was dry; by the time they closed their European tour in summer 2001, he hadn't written a song in months. The U.K. music press immediately pounced on the idea of Coldplay calling it quits, but somewhere lurked the beauty of "In My Place." The spirit and soul of this ballad allowed Coldplay to pull it together to make a second album. What came from such anguish and inquisition was A Rush of Blood to the Head. Coldplay has surely let it all go on this record. Acoustics are drowned out by Jon Buckland's riveting guitar work, and vocally, Martin has sharpened his falsetto, refining his haunting delivery. It's a strong album; you can feel, hear, and touch the blood, sweat, and tears behind each song, and that's exactly what Coldplay was going for. Co-producer Ken Nelson and mixer Mark Pythain (the team behind the blissful beauty of Parachutes) allowed Coldplay to make an album that's initially inaccessible, but that's what makes it intriguing. Lush melodies and a heartbreak behind the songs are there, but also a newfound confidence. From the delicate, shimmery classic "In My Place" to the piano surge of "The Scientist," Coldplay exudes an honest passion. The disco haze of "Daylight" and the love-drunk ballad "Green Eyes" are divine examples of solid lyrical arrangements, but "Politik" and the stunning guitar-driven "God Put a Smile Upon Your Face" project a nervy edge to the band. Echoes of early post-punk showcase Coldplay's ballsy musicianship. Don't fret -- it's not exactly rock & roll, but Radiohead, Echo & the Bunnymen, and the Smiths aren't exactly rock & roll either, and they're well loved. "Yellow" didn't follow the rock formula, but it sold well, and similarly A Rush of Blood to the Head might not instantly grab listeners, but it's not tailored that way. It pushes you to look beyond dreamy vocals for a musical inner core. Regardless of the band still being in their mid-twenties, they've made an amazing record, and if it ends up being their last, A Rush of Blood to the Head didn't sugarcoat anything. It's a bittersweet design no matter what. ~ MacKenzie Wilson, Rovi