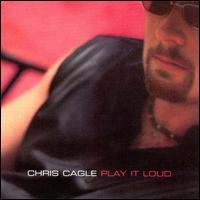 Like many young country music artists, Chris Cagle didn't grow up with country music so much as he did country-influenced pop and rock; his touchstones are the Eagles and Lynyrd Skynyrd, not Hank Williams and Merle Haggard. While his debut album Play It Loud unquestionably deserves to be filed under country, it's best to think of it just as much in the Southern rock category. Listening to it, music fans will be reminded most frequently of the Marshall Tucker Band and, especially, the Charlie Daniels Band. Cagle is most at home on up-tempo tracks like "Country by the Grace of God," "Rock the Boat," and the title track, also showing an affinity for swamp rock on "Love Between a Woman and a Man." Hence the leadoff track, "My Love Goes on and On," released months ahead of the album as Cagle's first single, is a good representation of his style, since it is another driving country-rocker. Necessarily, Cagle mixes in a few ballads, but they are not among the album's most impressive tracks. It may be that, with slower tempos and more emphasis on lyrics, such songs reveal Cagle's formulaic songwriting approach less flatteringly. The cliché-ridden, stereotypical declarations of romantic devotion would require a more distinctive balladeer to put it over successfully. The chief exception is the heart-rending "I Breathe In, I Breathe Out," actually Cagle's first song to be recorded (David Kersh cut it in 1997), which was added to the album for its Capitol Records reissue in June, 2001, along with another bonus track, "Are You Ever Gonna Love Me," and some multi-media content including the video for "Laredo," the album's second emphasis track and second chart hit. Cagle is an enthusiastic and engaging performer on his first album, but not yet a fully developed talent. ~ William Ruhlmann, Rovi