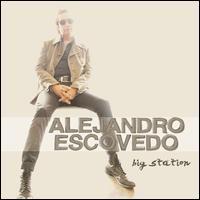 Big Station is songwriter Alejandro Escovedo's 11th album, and his third consecutive collaboration with producer Tony Visconti. This pairing and Escovedo's writing partnership with Chuck Prophet have already been fruitful, but Big Station, with its headstrong rock & roll heart, is also more ambitious than either of its predecessors. The album is full of diverse musical and production notions ranging from the Clash's Sandinista! to records by Tinariwen, Rachid Taha, Lou Reed, and Mink DeVille, but bear Escovedo's own indelible signature. Visconti's predilection for enormous basslines, female backing choruses, handclaps, and tight rhythm sections is readily evident; it adds to the album's pleasure factor by ten. Escovedo and Prophet have chosen to write tight songs that contain readily apparent, hooky melodies, juxtaposed against (usually) poignant lyrics. "Man of the World" opens it all with a meld of big glam guitars, handclaps, and a backing Ramones-esque "oh yeah" chorus that is infectious and offsets the tune's weighty subject matter. The title track, driven by acoustic guitars and an equally electric chorus, is pumped up by percussive elements from hands, snares, and a menacing bassline underneath. It's a broken, desperate love song, but you'd never know it by its melody or arrangement. "Sally Was a Cop" is a cutting observation about the Mexican drug war, and the choices the country's citizens are forced to make. On "Can't Make Me Run," a muted trumpet and nasty fat bassline front a droning guitar line and airtight percussive groove. The lyric views the world from an utterly disillusioned and bewildered space, vacillating between fear and defiance. Near the end, Escovedo's protagonist's homesickness pleads for the guidance of his mother and seems to hear her in the wind as she responds repeatedly: "Don't give up on love." Here again, the Miles-like mute on the trumpet, funky bassline, and clapping grab the listener instantly. "San Antonio Rain," with its sad Americana melody, is tinged with a stirring norteño string chart and contains the devastating line "The last thing I need/Is something that will kill my pain," which we recall even as the protagonist begins to waver -- we never discover if he falters. "Headstrong Crazy Fools" looks back at life and its characters without nostalgia; in their place are wisdom and a hard-earned sense of humor -- revealed by the music itself. "Common Mistake" and "Party People" recall late-'70s new wave, but without irony or gimmicks; the music is undeniably catchy but both songs carry lyric heft. Set closer "Sabor a Mi," sung in Spanish, is the album's only cover. It was penned in 1959 by Mexican composer Alvaro Carrillo. For all its ambition and poetry, Big Station is consistently great fun. The songwriting and recording employed here take Escovedo's populist and sophisticated art to a whole new level. ~ Thom Jurek, Rovi