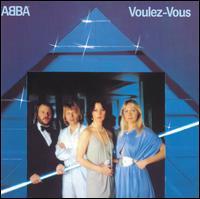 That it took nearly a year to record Voulez-Vous is an indicator of the creative and personal box in which the four members of ABBA found themselves at the end of the '70s. Their sixth album coincided with the marital split between Agnetha Fältskog and Björn Ulvaeus and the massively shifting currents in popular music, with disco, which had been on the wane, suddenly undergoing a renaissance thanks to the 1977 movie Saturday Night Fever. Thus, about half of Voulez-Vous shows the heavy influence of the Bee Gees from their megahit disco era. This is shown not just in the fact that the backing track for the title song was cut at Criteria Studios in Miami, where the Bee Gees had cut Main Course, Children of the World, and most of the rest of their disco-era music, but through the funky beat that ran through much of the material; yet the album still had a pair of soft, lyrical Europop-style ballads, "I Have a Dream" and "Chiquitita," both of which proved as popular as any of the more dance-oriented songs, and were reminders of Fältskog's and Ulvaeus' roots, in particular, in popular folk music during the mid- to late '60s. Those two songs, plus "Angeleyes," "Does Your Mother Know," and the title cut, were all Top Five singles in England, although only "Chiquitita" and "Does Your Mother Know" were Top 40 hits in America, where the album's sales peaked at a modest 500,000 or so. [Voulez-Vous, which originally appeared in America on the Atlantic label, was reissued by PolyGram in an upgraded remastered form on CD in 1999, and then in a further upgrade by Universal Music in digipack form with extensive historical notes and full lyrics in the fall of 2001, with three bonus cuts. "Summer Night City" only reinforced the stylistic connection of the sessions with the Bee Gees, while the undeservedly overlooked "Lovelight" was a non-LP B-side to "Chiquitita" and "Gimme! Gimme! Gimme! (A Man After Midnight)" was the hit that emerged immediately after the LP, to coincide with the quartet's upcoming tour. The sound on the 2001 reissue makes it superior to any prior edition, all of the vocals coming through with startling clarity and details, such as the crunchy guitar on "Does Your Mother Know" punching through like it's in the same room with you. Coupled with the opulent packaging, it's the obvious choice for anyone looking to buy this record.] ~ Bruce Eder, Rovi