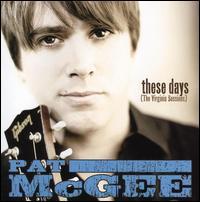 These Days (The Virginia Sessions)

It's been an eventful several years for Pat McGee since the release of his last studio album, 2004's Save Me, which, like its predecessors, 2000's Shine and 1999's live General Admission, and 1997's Revel, was credited to the Pat McGee Band (PMB). His major-label sojourn, which began with Shine, a one-week resident on the Billboard album chart, ended with Save Me, which did not chart at all, after which he and his cohorts were forced to pick themselves up, dust themselves off, and return to being the Virginia-based territory band they had been before, relying on their 250 dates a year up and down the Eastern Seaboard to sustain them. In 2006, PMB drummer Chris Williams died suddenly, but the group soldiered on, releasing the CD/DVD Vintage Stages Live in 2007 and the iTunes-only Live from the Southland at the start of 2009. Meanwhile, at their gigs they were hawking These Days (The Virginia Sessions), now picked up for retail distribution by Rock Ridge Music. It is the first album since 1995's From the Wood to be credited solely to McGee, even though all the bandmembers are on it and the PMB even gets a co-producer credit. In effect, it might as well be considered a full-fledged band effort, but maybe the billing signals a tribute to Williams, or an acknowledgement that the bandleader has been moonlighting in different configurations. Some evidence of the former supposition comes from the melancholy mood of much of the material. McGee has always taken romantic discord as his main lyric topic, but here a song such as "Come Back Home" may support a double meaning, and the album-closing "End of October" seems only interpretable as a lament about Williams' death. The tone lends the record more depth than the usual PMB album, which is all to the good. This is an artist who tends to be reliably pleasant but inescapably lightweight. It's no crime to make tuneful pop/rock with hooks aplenty, but in the second half of the '90s and the early years of the 21st century it just hasn't been a ticket to success wider than the band's touring radius. ~ William Ruhlmann, Rovi