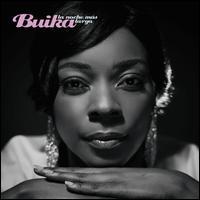 It has been five years since Concha Buika released Ultimo Trago, her tribute to ranchera legend Chavela Vargas in collaboration with Cuban pianist Chucho Valdés. She's also had her songs used in Pedro Almodovar's La Piel que Habito, authored two books, toured relentlessly, and relocated from Spain to Miami, Florida. On La Noche Mas Larga she has continued her musical evolution from her beginnings as a dynamic neuvo flamenco singer to a true stylist who weaves the roots, passion, and skill of that music into everything from Afro-Cuban styles, jazz, and even R&B. Co-produced by herself, pianist Ivan "Melon" Lewis, and percussionist Ramon Porrina, Buika reveals herself as an accomplished songwriter on nearly half these tunes. Recorded in Madrid, Miami, and New York, she surrounded herself with many familiar musicians including bassist Alain Perez and guitarist Juan Jose Suarez (aka "El Paquete"), as well as enlisting New York Latin jazz players like drummer Dafnis Prieto, to name one. "Seboney" showcases a flamenco jazz vocal inside an arrangement that melds conga-driven rhumba to funk. Her reading of Jacques Brel's "If You Go Away" ("Ne Me Quitte Pas") is transformed from a ballad to a 6/8 flamenco-infused Cuban jazz cooker that features some scatting, and for all its revisioning, still feels raw and sensual and mournful. Carlos Sarduy's muted trumpet aids in the slower Afro-Cuban groove that underscores "La Nave del Olvido." There is a pair of jazz standards here too, and though sung in English, they're completely re-arranged. "Don't Explain" is closely associated with Billie Holiday. This version is a swinging flamenco reading that evokes the spirit of jazz while never diving fully into it. Set-closer "Throw It Away" is an Abbey Lincoln signature piece. Buika's version, driven by Pérez's funky electric bassline, nonetheless employs the heart of flamenco as it meets neo-soul and modern jazz. "Como Era," an original, commences as a lilting ballad but gradually takes on a fingerpopping R&B groove. Buika's "Los Solos" suggests timba highlighted by bata drums. Her title track is a mysterious ballad that marries flamenco rhythms and dynamics to jazz syncopation and an elegiac yet sensual melody. Speaking of ballads, guitarist Pat Metheny appears on the smoky, aching "No Lo Se." With gorgeous production, creative vision, and an ambitious reach combined with poetic lyricism and musical sophistication, La Noche Mas Larga displays Buika's truly singular power as a singer; she can not only can inject flamenco's soul into virtually anything she sings, she can push hard at its walls convincingly, and without abandoning it. This is her masterpiece to date. ~ Thom Jurek, Rovi