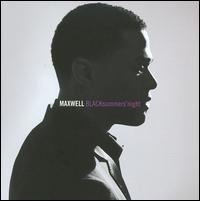 Maxwell spent part of the eight years between his third and fourth studio albums walking the Earth, attempting to experience a life resembling that of a human. One of neo-soul's most visible faces, along with Lauryn Hill and D'Angelo, he had been on the music industry's hamster wheel for most of his twenties and needed some tangible inspiration. At some point he got down to scheming and quite a lot of recording; BLACKsummers'night is the first release of a trilogy, with BlackSUMMERS'night (rooted in gospel, with a twist, apparently) and Blacksummers'NIGHT (promised as a disc of slow jams) to follow. Just as he arrived in 1996, offering an alternate option to the exaggerated masculinity that was dominating contemporary R&B, he returns as the airwaves are stuffed with raging hormones expressed through Auto-Tune. He has made no concessions to them. BLACKsummers'night is all devotion, regret, and heartache, written with Now collaborator Hod David and played by a session band, including a horn section, that sounds closer to a touring band that has been supporting the singer for years. The musicians morph with every shift in emotion through arrangements that are unfailingly exquisite and sensitively nuanced, even when they are briskly played. If the singer got into adventures while he was away, he does not detail them during these 38 unified minutes, but he did go through a serious, failed relationship, just as "Pretty Wings," the album's floating pre-album single, suggested. Like the real-life flip side to Al Green's "Simply Beautiful" -- the song Maxwell performed at the 2008 BET Awards, signaling his return -- it's catharsis through bittersweet elegance, equal in its enamored resentment ("You toyed with my affliction/Had to fill out my prescription") and remorse ("I came wrong, you were right/Transformed your love into like"). Although the rest of the album leaves plenty of space for the most common form of pleading, the disarming "Fistful of Tears" is as impassioned as the steamiest moments and indicates the complexity of Maxwell's relationship: "'Cause I go insane, crazy sometimes/Trying to keep you from losing your mind/Open your eyes, see what's in front of your face/Save me my fistful of...tears." For all its dimensions and progress, the album is simultaneously designed to ensure that devoted fans will feel the wait was worth it. After all, its opening lines are "Make me crazy, don't speak no sound/I want you to prove it to me in the nude," and they are sung in falsetto. ~ Andy Kellman, Rovi