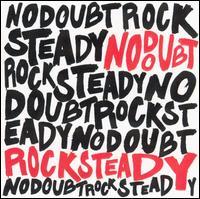 Five years separated Tragic Kingdom and its 2000 follow-up, Return of Saturn. About 15 months separated Saturn and its sequel, Rock Steady -- a clear sign that No Doubt was getting back to business, but it's really a more accurate reflection of Gwen Stefani's stature in 2001. Once Saturn started slipping down the charts -- apparently, the kids weren't ready to hear a post-new wave album about facing your thirties with your biological clock ticking -- Stefani started popping up all over the place, appearing on Moby's remix of "South Side" and duetting with Eve on "Let Me Blow Your Mind." These were major, major hits, restoring luster to Gwen Stefani, and therefore, No Doubt, while giving them some hip-hop/dance credibility (albeit rather small cred), so it was time to turn out another record to capitalize on this re-opened window. Smartly, they followed a Madonna blueprint by working with several producers -- Nellee Hooper, Sly & Robbie, Ric Ocasek, Prince, Steely & Clevie -- and running it through Mark "Spike" Stent for mixing and additional production, thereby giving it a unified sound while covering all the bases. And they certainly cover all their bases, retaining their footing in new wave and ska revival while ratcheting up their fondness for reggae (specifically, dancehall and ragga, unfortunately; the guest toasters are the only real misstep here) and their newly acquired taste for dance and hip-hop. It's a testament to No Doubt's abilities as a band (not to mention their sheer likeability; they're just so good-hearted and unpretentious, it's hard to imagine getting angered about this band) that it neither sounds like pandering to the charts or the opening salvo in Stefani's solo career -- it simply sounds like a good, hooky, stylish mainstream pop record, something that's rather rare in 2001. ~ Stephen Thomas Erlewine, Rovi