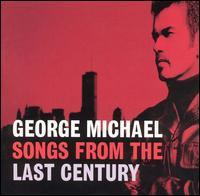 Songs from the Last Century

Unlike many covers albums, Songs From the Last Century is a cohesive, enjoyable diversion. With the help of co-producer Phil Ramone, George Michael has crafted a warm, intimate album built around a small combo of piano, guitar, bass, and drums. Orchestras, big bands, harps, and on one occasion, a rock band augment the basic combo, yet the flourishes never change the essential, close-knit nature of the group. For the first time ever, Michael sounds relaxed. He's lying back, singing songs he loves, not worrying about chart success, and the end result is quite fetching, even if it isn't perfect. The main flaw with Songs From the Last Century is that it's so smooth, it's occasionally a little sleepy, a trait that's emphasized by Michael's fairly predictable taste in covers -- "Brother Can You Spare a Dime," "My Baby Just Cares for Me," and "The First Time Ever I Saw Your Face," among others. Nevertheless, he does bring style and sophistication to these standards, even such often-covered yet still difficult tunes as "Wild as the Wind." When his selections are idiosyncratic -- whether it's a jazzy reading of "Roxanne," the brassy "Secret Love," the little-remembered "I Remember You," or a revelatory reading of "Miss Sarajevo," a song commonly dismissed as a U2 side project -- the album is delightful. Certainly, Songs From the Last Century isn't a major work; it's a way for Michael to decompress and have some fun, and the diehards who stuck with him through the turbulent '90s are likely to be charmed. ~ Stephen Thomas Erlewine, Rovi