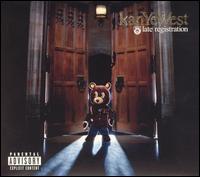 And then, in a flash, Kanye was everywhere, transformed from respected producer to big-name producer/MC, throwing a fit at the American Music Awards, performing "Jesus Walks" at the Grammys, wearing his diamond-studded Jesus piece, appearing on the cover of Time, running his mouth 24/7. One thing that remains unchanged is Kanye's hunger, even though his head has swollen to the point where it could be separated from his body, shot into space, and considered a planet. Raised middle class, Kanye didn't have to hustle his way out of poverty, the number one key to credibility for many hip-hop fans, whether it comes to rapper turned rapping label presidents or suburban teens. And now that he has proved himself in another way, through his stratospheric success -- which also won him a gaggle of haters as passionate as his followers -- he doesn't want to be seen as a novelty whose ambitions have been fulfilled. On Late Registration, he finds himself backed into a corner, albeit as king of the mountain. It's a paradox, which is exactly what he thrives on. His follow-up to The College Dropout isn't likely to change the minds of the resistant. As an MC, Kanye remains limited, with all-too-familiar flows that weren't exceptional to begin with (you could place a number of these rhymes over College Dropout beats). He uses the same lyrical strategies as well. Take lead single "Diamonds from Sierra Leone," in which he switches from boastful to rueful; more importantly, the conflict felt in owning blood diamonds will be lost on those who couldn't afford one with years of combined income. Even so, he can be tremendous as a pure writer, whether digging up uncovered topics (as on "Diamonds") or spinning a clever line ("Before anybody wanted K. West's beats, me and my girl split the buffet at KFC"). The production approach, however, is rather different from the debut. Crude beats and drastically tempo-shifted samples are replaced with a more traditionally musical touch from Jon Brion (Fiona Apple, Aimee Mann), who co-produces with West on most of the tracks. (Ironically, the Just Blaze-helmed "Touch the Sky" tops everything laid down by the pair, despite its heavy reliance on Curtis Mayfield's "Move on Up.") West and Brion are a good, if unlikely, match. Brion's string arrangements and brass flecks add a new dimension to West's beats without overshadowing them, and the results are neither too adventurous nor too conservative. While KRS-One was the first to proclaim, "I am hip-hop," Kanye West might as well be the first MC to boldly state, "I am pop." ~ Andy Kellman, Rovi